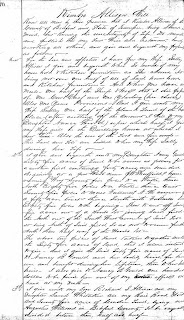 Kimbro Allison Will (Beginning on page 170)

First
For the love and affection I have for my wife Sally
Allison I give and bequeath to her so much of my
household & kitchen furniture as she chooses it
being not over one half of all of said household
and kitchen furniture.  And to her one horse or
mule--one cow 1 calf and one yearling(her choice)
also one year's provisions and I give unto my
wife Sally one half of the cleared land of the home
place(after cutting off the amount I will to my
daughter Nancy Gerald) upon which half I give
my wife will be the dwelling house at which I
now reside.  Also the use of the lots? and firewoods--
This land and lots are willed to her my wife Saly
during her life----

2nd
I give and bequeath unto my daughter Nancy Gerald
sixty-five acres of land to be ? as follows first
a certain field containing forty acres and bounded
beginning at a post  ? near J W Sheffield's house
running West Seventy-five poles to a stake, thence
North Eighty-five poles to Moses Fallwell's NW corner of
a fifty-acre tract thence South with the Fallwells line
Eighty-Five poles to the beginning.  Then  to cut off twenty
five acres out of a woods lot joining said field to
the North out of the South West corner of said lot.
It being north of said field so as not to r? further
north than half way of the woods lot.
The above two pieces of Land taken together making
the sixty-five acres of land that I alone intend
to give--and I give the said sixty-five acres of Land
to Nancy B Gerald and her bodily heirs for her
use and benefit during her lifetime, then to her bodily
heirs.  I also give to Nancy B Gerald one hundred
dollars to be paid her out of my effects on
hand at my death--

3rd
I give unto my son Richard S. Allison and my
daughter Sarah Whitaker all my Rail Road Stock
and twenty-five acres of lumber land lying near
Augustus Wilsons in Bedford County to be equally
divided between them, Half and Half.
(page 171) 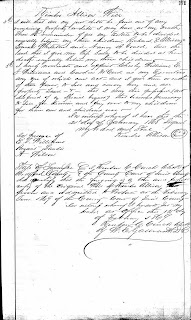 4th
I will that all my just debts be paid out of any
remaining property or debts I may have at my death
The remainder of all my estate to be divided
equally between my three children, Richard S. Allison
Sarah Whitaker and Nancy B Gould and the
land that I give my wife Sally to be divided at her
death equally between my three children--
5th
I hereby nominate and appoint Chesley Williams, E.
J. William and Cowden McCord as my executors
any one of which can act and I give them or authorize
of the power to sell and convey any and all
property Land  that I may die possessed(Not
disposed of by Special bequest) that becomes necessary
to sell for division and pay over to my children
for their own and children's use-


In witness whereof, I have this the
2nd Day of January 1868 Signed
my hand and seal
Kimbro Allison

In presence of
E.J. Williams
Bryant Landis
A. Wilson

I Reuben C Couch Clerk of
the County Court of said county
do certify that the foregoing is a true and proper
copy of the original  will of Kimbro Allison
proven and admitted to Probate at the February
Term of 1869 of the county court of said county
In Witness whereof, I have set my hand at office this 12 day
of February 1869
Reuben C Couch Clerk
Z. W. E. Gallworth D.C.