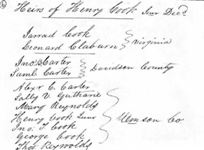 Found a will for a William Winston Sr. in Franklin Co NC(written 20 Jan 1810) who I felt was the father of Hannah Winston Cooke and his will confirms he has a daughter named Hanna Cooke.  Left a Comment on the record file of the image at Ancestry so I can tell which one it is without having to click thru.  Saved the image to my Cook Study working tree.

In the process of looking at William Winston's will I found the will of a Benjamin Winston who had a C ? Cook and a Joseph Cooke as witnesses.  There was a Benjamin Winston listed among the purchasers from the John Cook estate sale in 1814 neighboring Wake Co NC

Also found the will of Bartholomew Fuller who it appears was married to a Sarah Cooke.  Their daughter Nancy married into the Winston family.  The Cooke, Fuller and Winston families  appear to be connected in a number of ways.

Posted by Marie Cooke Beckman at 12:54 PM No comments: 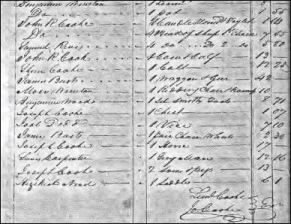 In an earlier blog post I transcribed the will of John Cooke of Wake Co. North Carolina.  I located the inventory of his estate and the account of sales. It was among the Wake Co NC records which are not yet indexed but are browsable at Ancestry.com.  Below is a listing of purchasers at the estate sale.  Some made multiple purchases. 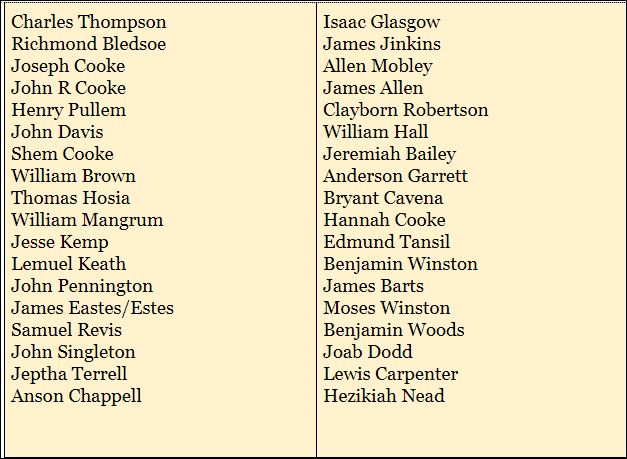 Posted by Marie Cooke Beckman at 12:23 PM No comments: 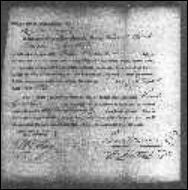 I, Lemuel Cook of the county of Wake in the state of North Carolina being of sound mind and memory, do this 23rd day of July 1863 make publish and declare this my last will and testament in manner and form as follows.

Lastly, I nominate and appoint my son W L Cook executor to this my last will and testament to execute and perform every part and clause thereof according to the true meaning and interest thereof. In testimony thereof I have hereunto set my hand and seal Signed, sealed, and acknowledged in the presence of

From Cover Page
Wake Co February Term 1817
The within last will and testament of John R Cook was in open court duly proven by the oaths of John Davis and Joel Farguson, witnesses thereto and ordered to be recorded
B.L. King CC

I've seen John R Cook listed as John Rucker Cook in a few family tree files but no source or document listed so it could just be an assumption of what the middle name may have been.

Given the niece's name from John R Cook's will(written 1816) it's possible that Joseph(brother of this Lemuel) could be the one who married Tamar Northern in 1803.  That would make the niece up to about 13 possibly?
Posted by Marie Cooke Beckman at 8:03 PM No comments: 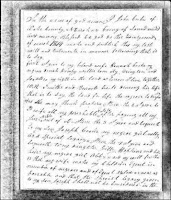 First I give to my beloved wife Hannah Cooke,  my Negroes-- Dinah, Pompey, Willis, Tom, Ily, Arington, and Joe also my right in land whereon I live together with Smith and Burnett tracts during her life that is to stay the land for life the Negroes to dispose as she might think properly

Item two I give to my wife all my perishable estate after paying all my just debts out of it
Item three I give and bequeath to my son Joseph Cooke my negro girl Nelly as a special legacy.
Item four I give and bequeath to my daughter Gilly Hopkins and her heirs my negro girl Abby and my will farther is that my wife make my children equal in number of Negroes and of equal value as near as possible and that the special legacy given to my son Joseph shall not be considered in the aforementioned dividend but as an extra legacy and I hereby make and order my beloved wife Hannah Cooke, Lemmuel Cooke, Joseph Cooke executors of this my last will and testament in witness whereof I have hereunto set my hand and affixed my seal this day and year first above written.

signed sealed and published by the testator in presence of us


Marie's Notes:  Please see original as this may contain errors and some liberties were taken with the formatting to make it more readable

I believe this is John Cooke, husband of Hannah Winston.  This John is thought to be the son of Shem Cooke(d. abt 1796 in Granville Co NC)  More research is necessary.  I have a few more wills of this John Cooke's descendants which I will try to get on the blog as soon as I can.  Adding the witnesses to  "FAN club" for John Cooke.
Posted by Marie Cooke Beckman at 5:34 PM No comments: