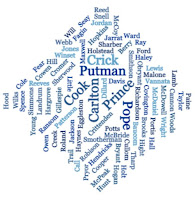 Over the past few years I've been studying Williamson Co TN Dist. 25 in hopes that knowing how the families were interconnected will help me to find a lead and break thru my Cook brickwall.  I've been using a spreadsheet to pull together my notes and information on this community so that I had somewhere to quickly look for notes on the families if they showed up in any other parts of my research. I'm publishing this to my blog in the hopes of finding other researchers interested in the area and time period that the information here might help.  This portion contains families who were living in or taxed in District 25 of Williamson Co TN during the years 1836-1840 whose surnames begin with M-P.  When possible I've noted connections in neighboring districts.  Simply put, there is a lot of overlap of families between Williamson Co TN Dist 25,  the Versailles and Eagleville area of Rutherford Co TN and Bedford Co TN Dist. 10(Rover). Also please note that anyone listed as NOT enumerated in District 25 should probably read not listed as Head of Household in Williamson Co. TN District 25.  They may be within another household OR they may not be enumerated at all within the district for a number of reasons.
A-C           D-H            J-L           M-P           R-S           T-Z
Malone William(Dist. 25 Tax List: 1836, 1837, 1838, 1839)Not enumerated in Dist. 25 in 1840.

Posted by Marie Cooke Beckman at 1:05 PM No comments: Looking at a few of the families enumerated near Wm C Cook's 1840 Dyer Co TN entry I recognize surnames that have connections to Rutherford Co TN.  In 1840, Absalom Vickery(brother in law of Wm C Cook) and his family were the neighboring county of Lauderdale.  Wade H Carlton(another brother in law of Wm C Cook) and his family were in nearby Weakley Co. TN. It should also be noted that there appears to be some of the Rutherford, Williamson Co.-District 25 & Bedford Co. TN-District 10 folks living in the area near Wade H Carlton and family.  I believe our ancestors were a lot more mobile than we give them credit for being.
Robert Henry Dyer(the namesake for Dyer Co) was in the War of 1812, Florida War and Natchez Expedition.  He also represented Bedford and Rutherford Counties in the General Assembly.

Henry Read-- a man by the same name and age group is in 1820 Rutherford Co TN.  I do not know if it's the same one.  In Nance's The History of Versailles, tenth district, and its people something very interesting in the section on the Read family which begins on page 194.  It says that Robert Read & Elizabeth Gentry Read's 8 children were born in Dyer Co TN where they had moved sometimes after 1817.[That area would have been Carroll Co. prior to 1823 when Dyer Co was formed] Elizabeth died in 1841 and Robert married Elvira Carson and the couple had 8 children together which were all born in Rutherford Co TN. This suggest that there is a connection between Rutherford County and Dyer County Read families but doesn't mention a Henry Read.  There may be more in the Eagleville history.

R A H McCorkle  (See link to previous post)McCorkle family was in Rutherford Co TN prior to Dyer Co and prior to that in Rowan & Iredell Co NC with connections to Gillespie and Brandon family.

J B Harrison(b. 1800-1810) I believe this is John B Harrison brother of Rebecca Harrison(wife of Hiram Putman--brother of Elizabeth Putman Cook and Noah Putman.)

Posted by Marie Cooke Beckman at 11:13 AM No comments: 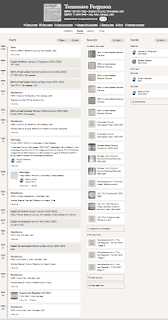 She was born Tennessee Ferguson to James Ferguson and Susan Carson but was never listed as that in any of the census records when she was living at home.  She was always listed under the last name of her step dad James P Cook.  There are still many holes in her timeline but I certainly have a better picture of her life than I did the first time I located her in the 1870 census.  Regarding her first marriage--I'm not sure what happened and at first I thought it might be another Tennie Hill but the evidence that it is her was greater.  I'm still searching for documentation on how that marriage ended.

I have a copy of the obituary of George H Solifelt.  There were two: one by the town talking about his service in the Army, and another VERY detailed one (likely written by Tennie) which gave the year that the two came to Iola KS as well as a short bio for George.  I haven't found anything to back up anything from the obituaries other than maybe the time they start appearing in Iola and that he was a veteran.   I'm sure there are more clues waiting to be discovered. For now this is what I have on Tennie. 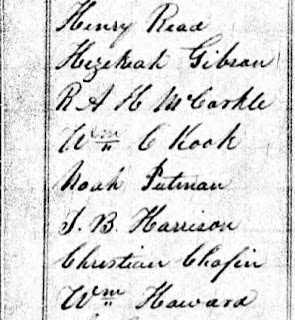 Looking at the 1840 US Federal Census for Dyer Co TN and studying those who were enumerated around my 2nd Great Grandfather Wm C Cook.  Most of those that remained in Dyer Co are enumerated in 1850 Federal Census in District 9.  I looked at maps for the years before and after 1840 and I believe that they would have been in the Eastern section of District 4 which was District 9 by 1850.

The most interesting find so far is the household enumerated immediately before Wm C. Cook.  That head of household is R. A. H. McCorkle.   Robert Andrew Hope McCorkle went to Nauvoo, IL  in 1844.  He was interested in learning about the Mormon religion and had questions for Joseph Smith. He didn't get to speak to Smith but did write to him and that correspondence was saved and is interesting reading.  It's a great insight into one of Wm C Cook's neighbors.  You can find more info about this letter at the link below.  This family was also in the Rutherford Co TN area prior to coming to Dyer Co. TN.  Prior to coming to TN they were in Rowan & Iredell Co. NC area.  Also Gillespie and Brandon ancestry in the McCorkle family.

Posted by Marie Cooke Beckman at 3:14 PM No comments: