Among the things that my paternal Grandmother had in her Scrapbooking box were two store credit/layaway payment cards.  The cardholder is her daughter--my Aunt June.  The store sold women's apparel and was located in Nashville.    The time of the purchases and layaway(early 1948) coincides with Aunt June's wedding to John Arnette Brannon.  Their wedding announcement describes the outfit she wore as a navy blue suit with matching accessories and also mentions that she wore red roses on her jacket lapel.  June was working for Southern Telephone Company during this time. 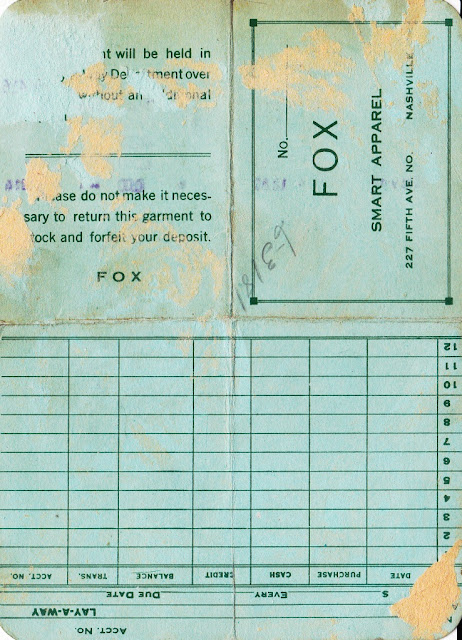 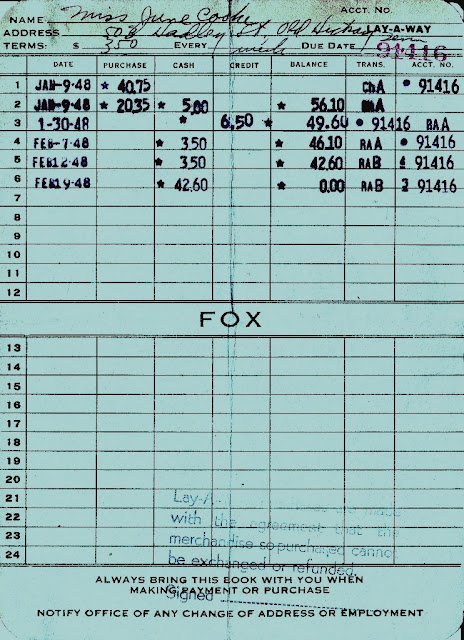 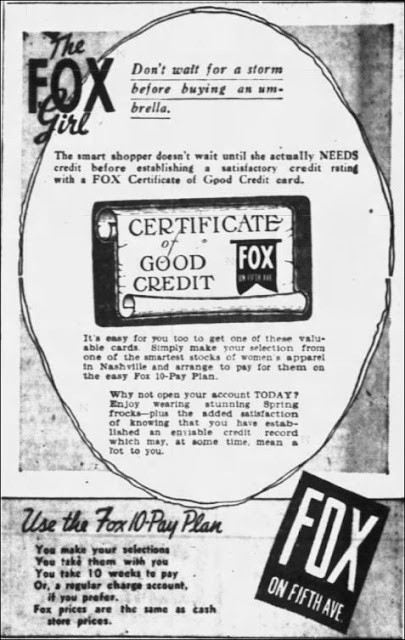 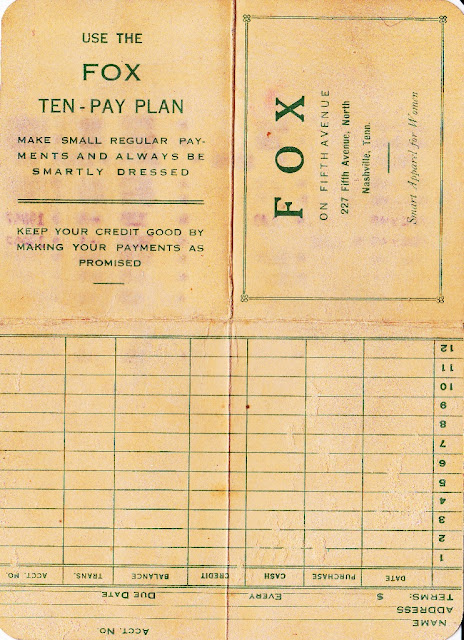 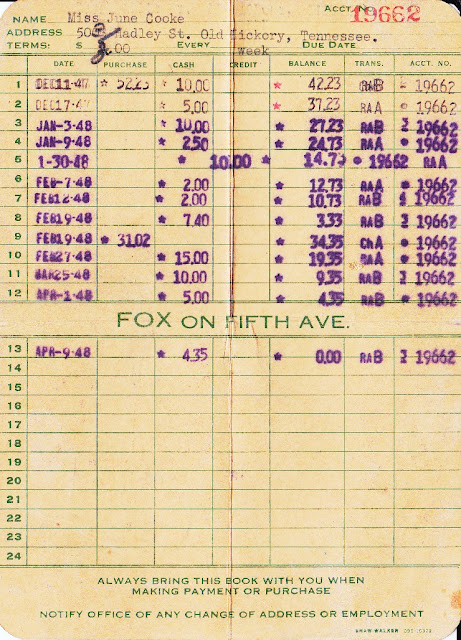 Posted by Marie Cooke Beckman at 5:00 AM 4 comments:

What was the most recent Federal Census available to the public when you began researching? For me, it was the 1910 census. A few months after the 1920 Federal Census was released I spent a great deal of time on the 5th floor of the Wallace State Community College Library(Hanceville, AL) in their Family History Collection viewing my ancestors on microfilm and giving my arm a workout advancing and rewinding the film. It won't be too long until we will be able to access the 1950 Federal Census from home. It will be released to the public on April 1, 2022.  I feel old...and grateful.

In what area will you be looking for your ancestors(or yourself if you were alive)?  If you don't know, you need to ask someone who does know.  You might try consulting a City Directory.  That's what I did.  I thought I knew where my Dad and his parents would be but upon consulting the directory, I found out that I did not.

Preparing to find Dad's Family in 1950
Dad passed on 7 years ago so I'm not able to ask him where he was living.  Consulting a Nashville Directory I found a 1950 entry of Thos E Cook(Pearl)  which I believe is my Grandparents(Mr. & Mrs Thomas D Cooke).  My Uncle Morris is also listed at the same address and my grandfather's place of employment and job title are what they should be which reinforces that I have the correct entry.  The 1950 directory gives 1301 Gallatin Road as the address where my Grandparents lived however the address listed in the 1951 Directory is 1311 East Greenwood Ave.  Between about 1954 and mid-1960s, my grandparents rented homes and moved frequently.  Sometimes Tom and Pearl had separate households.  I do have listings of the addresses I obtained from my grandmother's correspondence as well as a wide variety of receipts and other papers which she and Tom saved.  I would have expected them to still be living at 911 Dodson Ave in Old Hickory because I had been told that my Grandmother insisted that they stay there until my Dad returned from the service.  He didn't enlist until 1952 and had been working at Dupont prior to his enlistment.  He returned to work there when he came back home from Korea.  Apparently, my Grandparents begin moving around abt 6 years prior to what I'd always been told.

Preparing to find Mom's Family in 1950
Mom is still living so I asked her if she remembered where her family was in 1950.  She is "pretty sure" she and her family were living at C.P. Moore's place in Bone Cave in 1950.  She was 10 at the time so this may or may not be where they were.   Bone Cave is in Van Buren Co TN and even if I have to read the entire county it won't take near as much time to find her as it would if I had to do the same for Davidson Co TN for Dad.  There is also a slight possibility that they were in Lincoln Co TN as her family was sharecroppers and frequent movers.

This should be fun.  We've got a little under 4 years to figure it out.  Here's hoping that indexing for it will happen as soon as possible once it is released.
Posted by Marie Cooke Beckman at 7:17 PM No comments:

Allowing people to view your Ancestry tree is now easier than ever.  This will be a huge help not only for DNA testers but for sharing in general. I will be using this for most of my tree shares.  It is almost impossible to send a tree share invite to those who use their name instead of a username and who aren't able to see the tree because of a lack of a subscription.  This will take care of that.

1. While viewing the tree you wish to share, select Tree Settings.  Under Tree Settings select Sharing.
Under the Sharing section, Select Invite People.

2.  Notice there are now 3 ways to share the tree.  Select Shareable Link.

3.  You can choose the roles:  Guest, Contributor or Editor.  Also, the option to allow them to see living persons is available by share link.

4.  Once you have selected the Create Link a unique URL will appear which you can share.  Please note the blurb above the URL for more info on how the link will work.

Posted by Marie Cooke Beckman at 12:54 PM No comments:

Earlier this month, I attended Gena Philibert-Ortega's  webinar--“Researching Your Female Ancestor by the Company She Kept.” The webinars are one of the perks of being a member of the Virtual Genealogical Association(VGA).    So today I'm making a list of "communities" to research for my not just my female ancestors but my male ancestors as well.  I hope to be adding to this list so this blog post will(I hope) have many updates.


Posted by Marie Cooke Beckman at 4:30 AM No comments:

I really enjoy pension research. It's great for finding out where our ancestors and their families were living. Knowing that information can help us find even more documents and clues in areas in which we might not otherwise have known to look. One of my autosomal DNA matches has a William Eakin who is living in the same county where my paternal lines lived. This may or may not be the connection to my own family. I read thru the application (and later the transcription which I found within a Family Tree file at Ancestry) because I wanted to know where this family had been before coming to Tennessee.

Bedford Co TN ---7th May 1833 William Eakin states under oath that he was born 8th Oct 1765 in York District South Carolina and that he was a citizen and resident in that same district and state when he entered the Service(from earlier testimony--16 November 1780) and continued to be a Citizen of said District until the year 1810 when he removed to the State of Illinois and in 1812 he removed to Bedford County Tennessee where he has lived ever since. His widow filed for a pension in TX where they moved before his death. Her pension application includes additional dates and persons who knew them. (info from transcription at http://revwarapps.org/w3530.pdf )

This William Eakin and/or his family was in
This is just a small portion of the information included in this pension file. Who knows what is waiting to be found for your families. Sometimes, we tend to think that just because our ancestors didn't have the transportation modes we have today, they just didn't travel that much. Read through a few Pension application files.  I assure you, that is NOT the case. Many of my Tennessee lines(some direct and others cousin lines) went to Texas from Tennessee. Some returned to Tennessee while others stayed in Texas or moved on to California. This was all before the automobile was on the scene.

Check the FamilySearch's Wiki page for more information about Pensions.
Posted by Marie Cooke Beckman at 9:31 AM 2 comments:

Y-111 test Results are in for my Cook line


Results posted for my family's Y-111 marker DNA test several weeks back and I'm just now getting around to blogging about it.  When we tested at 37 markers we were close to descendants of Shem Cooke(1722-1796 Amelia Co VA) but our Y results were also close to a group of Patterson men.  By "close", I mean ranging from a genetic distance of 0 to 2.  So I upgraded to a 67 marker test and began studying all of the matches and where they had settled.   Just out of curiosity I also looked at the matches at 25 markers and could see that it had even more who were from the line of Shem Cooke.   At 67 markers we were still a genetic distance of 0 with one of the men from the Patterson group and were at a genetic distance of 1 -3 with the Shem Cooke descendants.  With the upgrade to 111 markers, we are now at a genetic distance of 2 with the Patterson tester we matched at GD=0 in the 67 marker level.  Also at GD=2 is the Shem Cooke descendant who also has a small match with my brother's autosomal test.  This descendant of Shem is from a line that moved to Carroll Co GA during the early 1800s.  So, for now, I'm still studying records in the earliest place our Cook line is known to have been as well as studying the lines that came out of Lunenburg Virginia on to Granville Co North Carolina and later to parts of Arkansas, Georgia, Mississippi, Missouri, and Tennessee.

I've put all of the close matches from each level who are from the Patterson or Cook(e) lines into a spreadsheet.

Even though I don't have all the answers yet that will make the direct connection between my 2nd Great Grandfather and his Cook linage I do have way more information on the lines and a better idea of where to look.  Also if you descend from any of the Cook(e)s who were in Bedford, Rutherford or Williamson Co TN thru the direct male line consider doing YDNA at the 37 marker level AND an autosomal DNA test.  If your Cook lines were from that area and you aren't thru a direct male line you can still take an autosomal test which might find a connection for you thru this or other lines.

I'd love to hear more discussion about what others are doing with their YDNA test results as far as analysis and findings.  I need to brainstorm/blog what to do next.
Posted by Marie Cooke Beckman at 5:00 AM No comments:

I've been using  DNApainter(a WONDERFUL DNA analysis tool by Jonny Perl) for a while now.  I'm not sure the exact date, but it couldn't have been more than a few minutes after I read about it in the Genetic Genealogy Tips & Techniques Facebook Group.  You can learn more about both of those by clicking on the linked text.  DNApainter is free but has additional tools available for subscribers.  Today I subscribed and I've been playing around with it.  I wanted to see what kind of coverage I had from my matches at GEDmatch.  I had used my kit and my Mom's kit to phase my DNA matches.  My Dad passed before we began DNA testing.  While the Paternal Phased kit is not a true comparison against his it will show all the matches I have which aren't Mom's which are presumably paternal.

It was abt at 74% coverage(I wish I had taken a screenshot then but I didn't) and I wanted to import the data from the painting I had done on my main profile.  I exported the segment information from that main profile and imported it into the Marie GEDmatch profile.so that I could identify more matching segments. 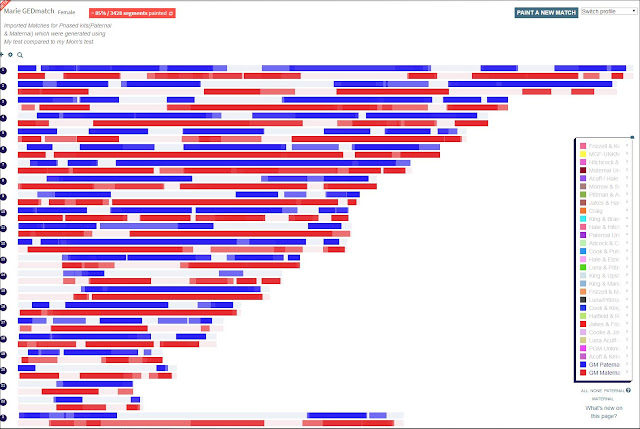 Once the main profile is imported here is how mine looked. Now to look at each chromosome and collect the clues. 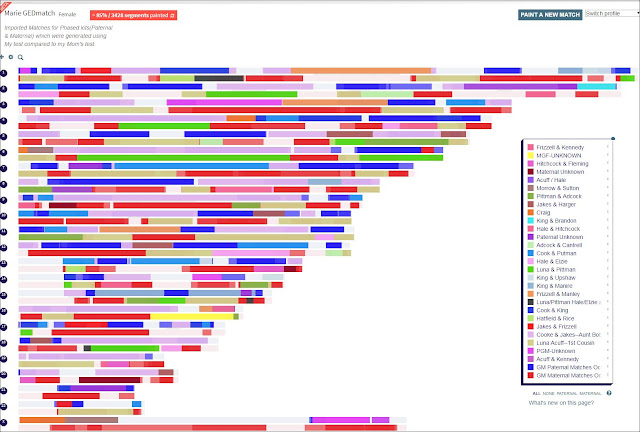