Upcoming webinars in 2018 at LegacyFamilyTree

I love their webinars and have learned so much from them.  Register at the above URL to attend any of the webinars which interest you.  If you would like to have access to all of the webinars in the library you have the option of subscribing.  You can find more info on that on their website.

Posted by Marie Cooke Beckman at 1:10 PM No comments:

FamilyTreeDNA sent out an email to person's who have tested with them that has sale prices for upgrades.  I hope that the surname groups are taking advantage of this and upgrading the 12 and 25 marker kits to 37 markers.  I'm not sure how long this is running though I would imagine it will end when the holiday sale ends. 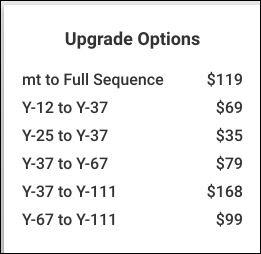 You may also be able to find coupon codes which would save even more money on the purchase.  Check your FTDNA account(s) for further info.  Logging on the account you want to upgrade and then clicking on upgrade or CART(upper right corner of the page) will show you what is available for that kit.

Posted by Marie Cooke Beckman at 12:56 PM No comments:


Most of Bedford County Tennessee's marriage records prior to 1861 did not survive so locating a marriage mentioned in a newspaper is a wonderful find. 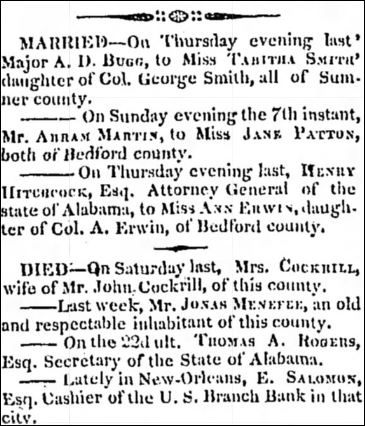 Posted by Marie Cooke Beckman at 7:27 PM No comments:

Posted by Marie Cooke Beckman at 8:45 PM No comments:

While researching the Cook line I came across the story of Benjamin Woodward a money maker-- but not the legal way.  He was a counterfeiter.  I developed a timeline of events using the articles that I was able to find at the Newspaper.com site.   The Cookes named in the first incident are likely cousins of mine.   Our Y DNA links to Shem Cooke(who married Ann Rucker) out of Virginia and Granville Co. North Carolina.  I can't positively identify them as there are many who carry the same name in the Cooke family and who live in the same area but given the Rucker name is also mentioned I'd consider it highly likely that there is a connection. Keep in mind while you read this that the punishment for counterfeiting was death.  This could be a movie plot.

Timeline
1773 25 Feb (Thur) --- The Virginia Gazette(Williamsburg, VA) Page 3
Capt. John Lightfoot returns from a trip to Pittsylvania on order of Gov. to apprehend and bring Benjamin Cooke, Joseph Cooke, James Cooke, Benjamin Woodward and Peter Medley in for questioning.  John Short, a former under Sheriff had reason to believe they were involved in counterfeiting and passing counterfeit notes.  At the time they were taken in, they had been at their shop where tools used in the producing counterfeit notes and coins were found.  All subjects with the exception of James Cooke(he did not appear to have done anything criminal) were taken on to jail and will go to York for further examination next Tuesday.  Several others also committed to jail on suspicion of being involved with the counterfeiting.  Gideon Rucker and Shem Cooke of Pittsylvania and John Hightower and William Hightower of Lunenburg have fled and the Governor is offering a reward.

1773 22 Apr (Thu)---The Virginia Gazette  (Williamsburg, Virginia) Page 3
Benjamin Cook, Benjamin Woodward, Joseph Cook, and Peter Medley, from Pittsylvania, for counterfeiting Gold and Silver Coins, and passing Counterfeit Treasury Notes:  Acquitted.  "The Testimony of John Short, the principal evidence against the prisoners, was invalidated by sundry evidences in their behalf, who proved him a most atrocious Villain;  and their counsel even made a motion in court to have him indicted for perjury.   He is since gone off; and has left behind him in this city, a wife and six helpless children in most pitiful circumstances."

Benjamin Woodward publishes denial of claims that he is involved in counterfeiting.

1790 18 Jun (Fri)---The State Gazette of North-Carolina (New Bern, NC) Page 3
(https://www.newspapers.com/image/55585181/)
Terrance Thynne is brought in on charges of passing counterfeit bills.  He claims no knowledge that the bills not being authentic.  He obtained them from Benjamin Woodward.  Thynne's witness is also found to have been guilty of passing counterfeit.  James Arthur is also brought in and more information on Benjamin Woodward's operation is obtained. 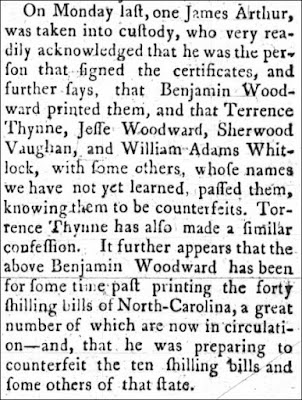 
Statement from Baltimore on July 18th. Beware of counterfeits of Virginia Military Certificates. believed to be passed by the brother of Benjamin Woodward of Dinwiddie Co. near Petersburgh, Virginia. While it doesn't give the first name of Woodward's brother it is likely the Jesse Woodward mentioned in the previous article. Description about 5' 7" or 8" well set, about 40 years old with short black hair, little grey ruddy complexion, dark eyes, with a small piece of his nose bit off(near upper part of right nostril) Last seen wearing black hat and cloth coat, nankeen waistcoat and breeches.

The following article from The Progress-Index(Petersburg, VA) tells a little more about Benjamin Woodward. The Dinwiddie Counterfeiter article by Tamara Eastman

Google Books also have a few that mention counterfeiter, Benjamin Woodward. I'm sure there was a lot more to the story.
Posted by Marie Cooke Beckman at 2:16 PM 1 comment:

This bit of information from The Kansas Herald peaks my curiosity as to why there were so many new subscribers from Unionville TN.  Was Mr. T.J. Fain THAT good of a salesman?  Were there folks from Unionville considering moving there or who had family there? 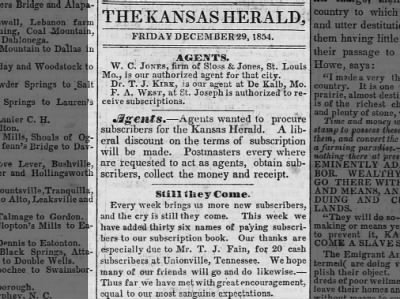 Posted by Marie Cooke Beckman at 10:07 PM No comments: