Did Plans Fall Through?

One of the items I found the other night while reviewing search results at Newspapers.com was an announcement in the local social news of the Iola Register concerning  George Solifelt and Tennie.  Her name is listed incorrectly as Jennie.  Still not yet able to prove the uncle / niece relationship but feel confident that this mention is the George & Tennie I've been researching.

This was during a time period for which I didn't have much information for George and Tennie other than a deed from them to Arthur T Cundy Lot 6 Harmons Sub-division an Add to Iola $1020(deed transfer from the Iola Register) Did they not go?  If they did, they were back in Iola by the time of the 1930 Census.  What happened?  They lived at 616 N 1st at the time of the 1920 Census.  Tennie is not listed in the 1929 City Directories of Iola but George is listed with a residence of 711 S. Jefferson Ave.  I wasn't able to find an Iola directory for 1928. A search for Fort Dodge or Ford County directories for the years in question didn't turn up any online.  Need to contact the library for that area to see if any directories for those years exist.  So now I'm wondering what was going on in Fort Dodge that made them want to move there about 1927.
Sources:

Posted by Marie Cooke Beckman at 10:25 PM No comments:

Gathering information on George Solifelt and found a few new items. One item is a letter home that was published in the Lewistown, PA paper. The letter was written by Union soldier, Joseph Tice who was captured during the Civil War and held at Danville.  The majority of the guys he mentions are part of Co E 20th PA Cavalry.  The only soldier I found by the name of Samuel Wasson for PA was from the 9th PA Infantry.

February 2, 1865
Dear Mother:-- This is the first opportuni
ty I have had to write to you since I am a
prisoner, and I hope these few lines will
reach you.  I was captured on the 19th of
July, at Ashby's Gap, along with Geo. Soli-
felt, Larry Brought, John Crawford, James
Summers and Harrison Cupples, from Free
dom Forge.
We are all well and in good spirits, and
expect to be exchanged soon.  Lewis Briner
and John Miller are well also. Samuel Was
son, from Mt. Union, died on the 8th of Nov
1864; please inform his relatives. We all
send much love and expect to hear from you
as soon as you receive this.  Your son,
Joseph Tice
P.S. Please inform the boys' friends of
their welfare.
Direct:--  C.S.M. Prison, No. 1,
Danville, Va.
Care Lt. Col. R.C. Smith

Posted by Marie Cooke Beckman at 5:31 PM No comments:

I've always loved census records because they provide me with so much information along with a time and place framework for finding more documents and more information. After all, pretty much every document you find will lead you to another document.   I'm currently studying a "shirttail relative."  Tennie was the step daughter of my paternal Grandfather's paternal uncle. 😀  The following update on my research detailing the census records that led me to wills, marriage records, newspaper articles, pension files and a number of other records will give you an idea of what can be found if you know where to look.  With the advances in indexing. finding our folks when they are in an unexpected location is so much easier than it used to be.  If you are interested in seeing the sources I mention in this post, they can be found in my tree at Ancestry.  If you don't have an Ancestry subscription, try accessing it thru your local library.
Tennessee "Tennie" Ferguson's Census entries
Henry F Hill's Census Entries

George H Solifelt Census Entries
George is a complicated character.
Tennie did file for a widow's pension and I also need to get copies of those files.  I'm hoping to find more info about Tennie's first husband, Hugh Clawson as well.
Posted by Marie Cooke Beckman at 2:01 PM No comments:

Periodically I search for surnames or locations at the Hathitrust site just to see what is out there or has been added since my last search. A search on my paternal grandmother's place of birth(Bell Buckle, TN) pulled up a number of the American Jack Stock Stud Books.  There was a gentleman who lived in Bell Buckle who owned some of the livestock that was listed. His name was Robert Lingo Bigham(sometimes spelled Bingham). I wonder if my Grandmother or her parents knew him.  It seems likely as her family had raised horses and other livestock in Bell Buckle around the same time period that he and his family lived there.  He is listed as a Trader in Livestock for the 1910 and the 1920 Census.  He passed in April 1st 1925 at the age of 56 and is buried in the Hazel Cemetery in Bedford Co TN.

If you are lucky enough to have your family listed as an owner or breeder that gives you additional details about their life. 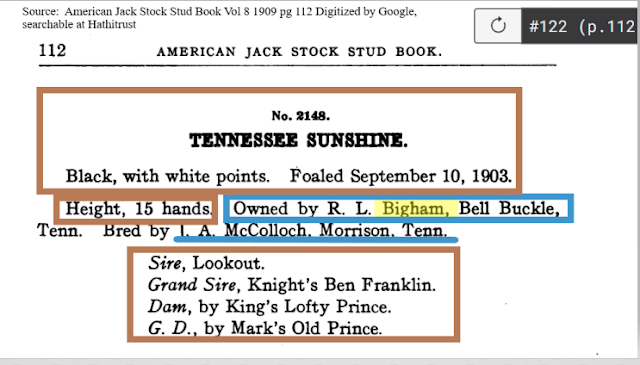 Sources:
Posted by Marie Cooke Beckman at 5:05 PM No comments:

Two of the items in the Cooke/Jakes Family Archives binder are receipts from where my grandmother was a patient of Dr. Andrew Hollabaugh.  This particular one is from 23rd of August 1962.  There is another one dated 14th March 1963.  Dr. Hollabaugh suffered a fatal heart attack on the 7th of April 1963. 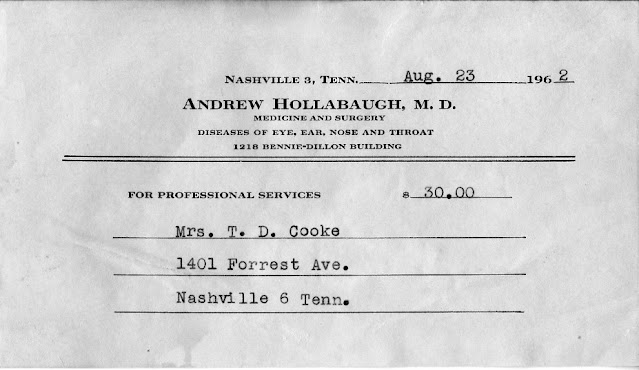 If you are interested in knowing more about my Cooke/Jakes Family Archives binder you can read more about it in my post from 4 years ago entitled "Just a Small Portion of a Family's Paper Trail." 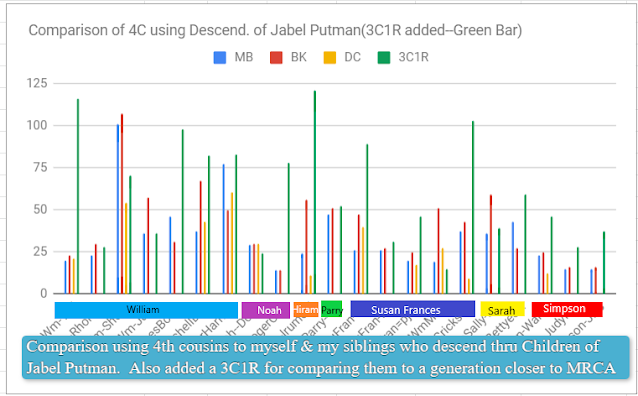 Last month I posted a chart which compared the amount of shared DNA between 3 of my siblings and myself to a set of 4 siblings which are 4th cousins to us.  They were all descendants of William Putman, son of Jabel Putman. My siblings and I descend thru Jabel's daughter Elizabeth Putman Cook.  I thought it might also be interesting to see a chart of the other 4th cousins who also descend thru Jabel Putman compared to my siblings and myself.  I didn't include one of my brothers in this comparison because he isn't tested at all the sites which I used to collect the matches. There is representation from all but 2 of Jabel's children who had children.  I wasn't able to include descendants of their branches because I couldn't find tested descendants thru them who were 4th Cousins to us.  It seems we have an abundance of 4C1R from Jabel.  As I did in my previous chart I also included a 3C1R's amount(shown in green) so there would be a point of reference for a generation closer to the Most Recent Common Ancestor(MRCA).

Nothing really conclusive to tell if Wm Putman's descendants are Double 4C with us.  It's believed that Wm Putman's wife was the sister of Elizabeth Putman Cook's husband, Wm C Cook but we have no definite proof as we have not located Wm & Anna's marriage nor do we have definite proof of the parents of Wm C Cook.

Posted by Marie Cooke Beckman at 7:16 PM No comments: