I uploaded my AncestryDNA test to 23andme during a DNA special they had for DNA day 2018.  I believe they called this promo Discover23(at least that it how it's noted in my settings there).  They did not offer matching for the uploaded tests but showed Ancestry Composition.  I recently also tested  with them to get myself in their database for matching purposes.  Below is a comparison of the two tests.  The AncestryDNA test was version 2 and the 23andme is their latest chip test.

DNA Relatives Comparison of the tests:

While the AncestryDNA upload there won't show me my matches it did show me a graphic that said I had 1165 matches which is close to the number on my match list from the test thru 23&me which lists 1177 DNA relatives.

Ethnicity Comparison of the tests:

Posted by Marie Cooke Beckman at 6:50 AM No comments:

A letter from First Baptist Church of Old Hickory

Found among my paternal Grandmother, Pearl Gray Jakes Cooke's papers, this letter is part of the archived collection of my families papers(Thomas & Pearl Jakes Cooke Family) that I wrote about in an earlier post--Just a Small Portion of a Family's Paper Trail.    I wish I had a copy of the letter which she wrote.  You can click on the letter to enlarge it. 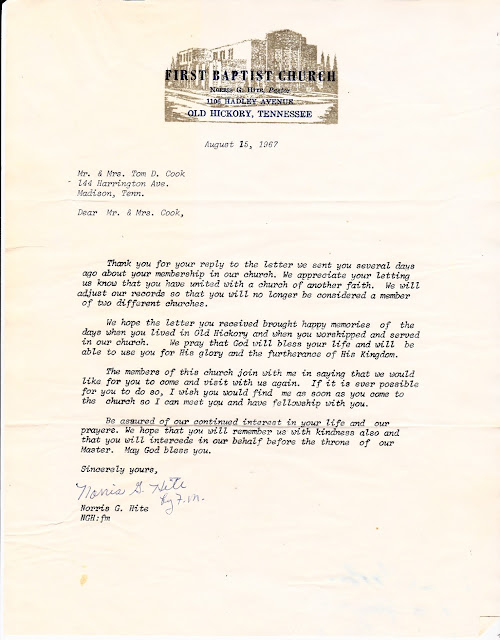 Posted by Marie Cooke Beckman at 11:55 AM No comments: