My attempt at Transcription of the will of Peter Goodwin.  Please consult original and images for accuracy as I am human.

James Thedford and George W. Tatom subscribing witnesses there to which was ordered to be recorded
Test Field Farrar Clk
By his Deputy Tho. J. Kelly

State of Tennessee Dickson County
Then was the within last will and testament
of Peter Goodwin dec'd record in book A page 139
Test Field Farrar Clk.

In the Name of God Amen I Peter Goodwin of the County
of Dickson and State of Tennessee Being in a low state
of health but of perfict(sic) mind and memory do this day
my last will and Testament in a maner(thi and form
Following to wit
1st I gave(sic) to my beloved wife Sally Goodwin all
my estate both real and personal During hir
Natural life or widowhood and after hur death to be devided as follows
I geve to my Five Youngist children Lusy Goodwin
Sabry(**) Goodwin William Goodwin Peter Goodwin John
Goodwin after the death of my wife all of my real and
pershable property consisting of lands horses cattle hogs
household and kitchen Furneture to gather with my
farming tools of evary kind to be sold and equally
devided amongst the five youngist above named
children and lastly I apint Thomas Murrell
and George W. Tatom sole Executors of this my
last will and testament
Peter Goodwin
X  (his mark & seal)


(**) This is corrected? to Sal in all other rewritten documents but I see a difference in the way he wrote this child's name and the way he wrote his wife, Sally's name. Not really sure what it is.  Too it looks like a bad spelling of Sarah/ Sary  See below 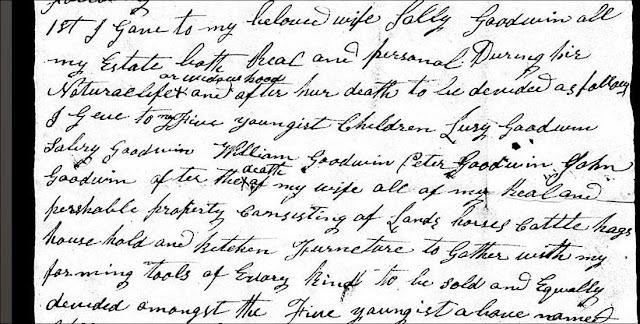 There are at least 4 records of this will at Ancestry.com.  This serves as a great example of why it is important to check all copies of a document.  While the Cover page says it is recorded in Book A. the recorded will image is listed as being in Vol B-C 1803-1929 Dickson Co. TN Wills 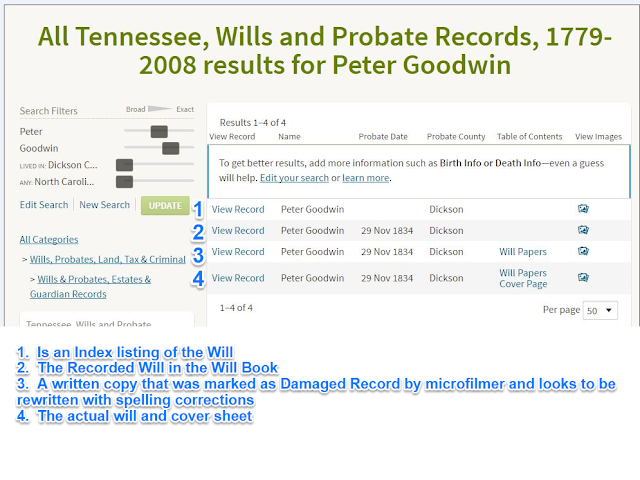 There is a Marriage Record for a Peter Goodwin and a Sally Camp in Halifax Co Virginia on 27 Jun 1803. Not sure if that is who this couple is or not though some of the trees at Ancestry do have that listed for them.


Posted by Marie Cooke Beckman at 9:40 PM No comments: