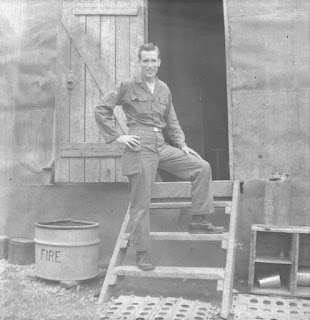 Over the past few weeks, I've been scanning old negatives that my mother and aunt have come across while they were packing things for a move. A good number of them were negatives of pictures that I'd never seen before. The above picture is of my Dad while he was in the army during the Korean War.  The process I used for this was fairly simple for the larger black and white negatives.

Some of the color negatives(126 Kodak Film) were easier to convert to digital picture using a GMYLE smart digital image copier that I'd purchased about 10 years go(It connects via USB and is about 4" x 4"  and came with two trays--one to load film and another for slides.  The scanner came with ArcSoft Software  to retrieve the scans.  When using it I just scanned and then used an image editing software on it.

You could probably come up with your own combination of how to do this using what you have available.  You'd need a way to backlight the negative and scan it and then a way to convert it from negative to positive.

18 of my favorite books in my personal library

I can hardly believe that I've been blogging about my genealogy for 18 years.  When I consider that I've been researching for about 32 years, it doesn't seem like that far of a stretch.  In keeping with the purpose of my blog, I am celebrating the 18th blogiversary with a favorites listing(in no particular order).  I've compiled a list of 18 of my favorite genealogy/history books in my personal library.  I have an account at LibraryThing.com for cataloging purposes.  This really helps me out so that I don't buy more than one copy of a book(Yes, I've done that before.) You'll see that some of the books are Volume 1 of a set. That's my way of "squeezing in" the entire set as one book.  I also use WorldCat.org to find books which aren't in my personal library ...yet. 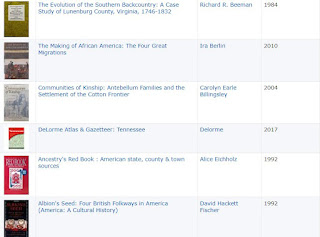 Where are Wm Green Cook & wife Jane at the time of the 1920 US Federal Census?

Many people are in search of their ancestors in the newly released 1950 US Federal Census. I've been fortunate to find the vast majority of my close relatives in it and will wait until there is an index to search for those more distant relatives. It seems like a good time to take inventory of my direct ancestors and their census records. There are several paternal and a few maternal  ancestors that I have been unable to find in the US Federal Censuses that were recorded between 1850 and 1940.  One of my most recent MIA census records is the entry for my paternal great grandparents, William Green Cook and Jane B King Cook.  My study of the tax records of Wm Green Cook for the years 1912-1944 leads me to believe that they should be in Civil District 10 of  Rutherford Co TN . I've included the study below along with the snippet of the census page where they should have been enumerated.  Jane died a year after the census from pulmonary tuberculosis but appeared to have been sick with it since the fall of 1920 according to the information given on her death certificate.  At least that was the time she was treated by the physician who signed off on her death certificate. 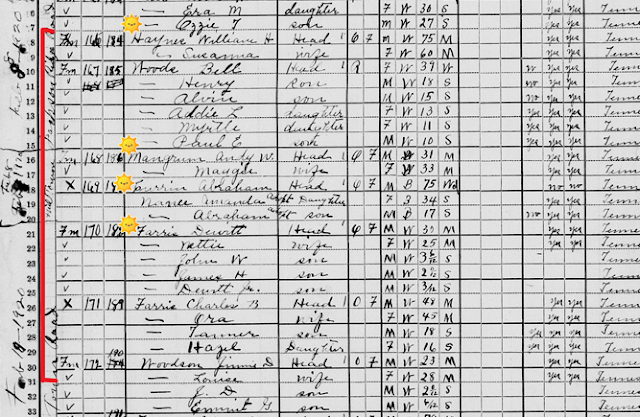 Above screenshot of 1920 US Federal Census--Rutherford Co TN--District 10 ED 123 Sheet 9A(image 17 of 20 at FamilySearch.org
Displacement of some sort was going on at the time of the census which may or may not have had to do with the TB and flu outbreaks happening in the area during that timeframe.  In the document granting the adoption, it mentions that Eliza is living in Chapel Hill with her Father & Mother but that her parents home is in Rutherford Co TN.  This letter is dated Dec 31, 1918 so that would have been a year and a day before the 1920 Census date of January 1st.  Were the missing people all together or at an infirmary or TB sanatorium?  Was the census taker aware that they were sick and skipped their home?  The daughters could be there taking care of their Mom.  A number of people from this family worked at the pencil mill but those folks were living in Marshall Co TN and the missing members are not with either of these families.  In my efforts to find my great grandparents, I've discovered a lot more questions than answers.
Further Research Opportunities
Newspapers 1918-1930s
Marshall Co TN paper (at FamilySearch.org)
Murfreesboro paper(at Newspapers.com via my subscription)
Where are Tennessee Orphan's Home records(Columbia, TN) archived?  What additional correspondence(if any) might they have?
How were hospitals and sick houses treated for enumeration purposes during the 1920 Census?
[These are just the ones I can think of right now I'll probably add to the list before I'm able to find the answers.]
Sources:
Posted by Marie Cooke Beckman at 7:22 PM No comments:

Below is my list of citations for some of my paternal relatives who were in the 1950 US Federal Census.  The citation format is based on one recommended by Elizabeth Shown Mills in her Facebook post of April 1, 2022 10:04am.  I did make some minor modifications and probably also some typos. 😊A link to the Enumeration Districts is also included after each citation.  This will be a great help to me when I read thru the districts again. I feel fortunate to have found these with no indexing other than the OCR and AI indexing that was used by Archives.gov.  Looks like I only had one household where no one was home and they had revisit.  Those revisits are listed at the end of each enumeration district and those sheet #s start with 71.  See this informative post at HistoryHub.
Dad, His parents and siblings
Papaw Cooke & Grannie Cooke & their children who were still living at home.1950 U.S. census, Davidson Co., TN, Old Hickory, Enumeration District 19-17, Sheet 10, Serial/Household #  91, lines 7-12 (Thomas D Cooke family); U.S. National Archives, 1950 Census (https://1950census.archives.gov/search/).
Link to District 19-17 https://1950census.archives.gov/search/?county=Davidson&ed=19-17&state=TN

Census Entries from my Paternal Grandfather's side of the family