Exploring the mtDNA matches of my daughter today.  I keep a mtDNA Tree(private) at Ancestry to study the ones which have an exact match because of the backwards mutation present at her 5th Gr Grandmother level.  (mtDNA Haplogroup H3-T152C!) Our documentation is back to Nancy Combs Fleming[1797(NC/TN)-1881 TX ] who was the daughter of Mason Combs and his wife Dorothy.  Dorothy would be the contributor of the mtDNA.

Research using mtDNA results is most useful when used to compare testers matrilineal lines in the hopes of answering a question. Were it not for the backwards mutation in our line, the genetic distance = 0 (zero) matches with ancestry in the same general area, and the groupings of matches I probably wouldn't be giving this much thought until a specific research question arose.

There are several groups within the exact matches who are in the TN / NC area in which our matrilineal line lived.  In addition to our group of Dorothy Combs descendants there are about 4 other groups.  I generally focus on two of the others in addition to my own.

Today I was looking at Catherine's ancestry and where she had lived.  The census record below is of Sylvanias Blackburn & family in 1830 Hickman Co TN.  This was Catherine's husband.  They lived with his parents but moved off to War Eagle Creek Arkansas not long after this census. 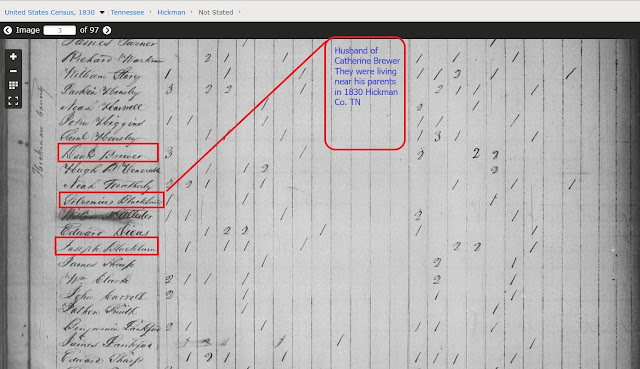 There may be others from this line who have tested and match but do not have any type of tree where I can work out the connection.  I've written several asking about their tree but people just don't respond much.
Just thought this was a nice break from  butting my head against my own brickwalls.
Posted by Marie Cooke Beckman at 8:28 PM No comments:

Rev. Felix Zollicoffer King(my 1st Cousin 3 times removed) was no doubt the namesake of  Felix Zollicoffer, the Civil War Confederate Brigadier General & US Congressman of Maury County, Tennessee.  I found a sketch about him in the Nashville Banner's Church Chimes section from 7th of April 1894 edition(p. 12 col 1).  This article can be found online at Newspapers.com.   I am transcribing a portion of it here.  The last part of the sketch is difficult to read due to a piece of tape on the image.

I'm interested not only because of the King /Upshaw connection(our closest connection--we also connect thru  my Ogilvie / Harris 5th Great Grandparents) but there is mention of Samuel King but the way it's written it appears to say that Samuel King is a maternal connection for him.  My King line is one that needs research as it is little more than speciation back beyond John King & Nancy Brandon.  I've never seen or found any documentation beyond that point although admittedly I've been focused on other lines which weren't back to the time period.  There should be records in KY where John King reportedly moved the family from to Bedford County area.  There should also be some in Elbert Co GA as well as NC(presumably in Buncombe Co if family story is correct).  I often wonder if the connection of my Kings to my Cook(e)s started way before the marriage of my Great Grandparents Wm Green Cook and Jane Bell King.  Maybe the key to my Cook line connection lies in the also finding out the Kings.  If only the surnames weren't such common names.  We do have YDNA testers from both of those lines. 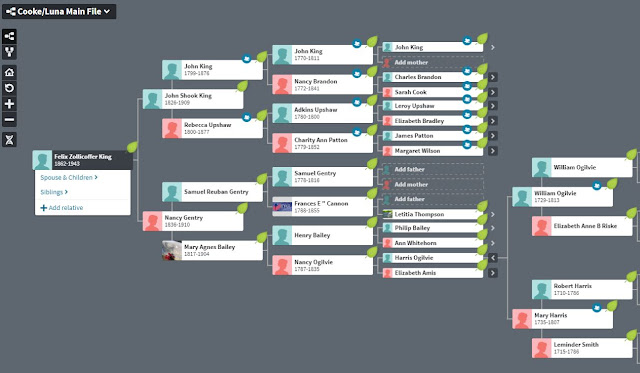 Except Two months in his eleventh year he was not in school at all, until he was 17 years of age and then only three months each for two years.  A notable fact which indicated something of what would have been his attainments had he received early advantages is that during those tow months spend in a county school, when he was 10 years old, he not only mastered the intricacies of the English alphabet, but he performed the herculean task of spelling entirely thru the Webster's, blue-back spell of precious memory, so that he could spell every word in the book by heart.

At the age of 19 he entered the Unionville High School, Bedford County, where he spent two of the happiest and most profitable years of his life.  converted at the age of 18, he joined the Cumberland Presbyterian Church at the age of 18.  In the interim he remembered a heroic struggle with infidelity, a struggle which ultimately resulted in firmly fixing his faith upon the gospel of Christ.

Mr. King is accustomed to say that his early impressions that he would become a preacher were received a the age of 4 years, during a revival which was being held near his home by Rev John P Hastings.  he joined Elk Presbytery as a candidate for the ministry at the age of 19, and was ordained in 1886.  The first three years of his life as a preacher were devoted to almost constant preaching of the gospel, and for his services during that period he received the munificent sum of $15.00.  After spending a year following this in successful evangelistic work with Rev. T M Hendrix and Rev. N D Crawford he became pastor of three country churches in Bedford and Rutherford Counties, all of which were organized by Samuel King, whose old home still stands at Three Forks, one of these churches.  He entered Cumberland University in 1889, spending two years in special study of English and the sciences.  He found himself inclined to give special attention to philosophy.  He graduated with the degree of Bachelor of Divinity in 1893.

During his first years in school at Lebanon he preached on an average three Sunday a month, thereby securing all the money necessary to support himself and his family during that period.  Mr. King was married to Miss Jennie S Floyd, of Flat Creek, Tenn. December 5, 1886, and is the father of two promising songs.

For some months previous to his graduation he supplied the Second Edgefield Cumberland Presbyterian Church, taking formal charge as pastor in June, 1893.  He has been very successful in all his work, especially in revival work.  His success as a pastor has been scarcely less.

The Second Edgefield church, under his ministry for the last eighteen months, has been doubled in membership and multiplied to all the element of congregational strength.  An effort is being made to build a handsome house of worship in the near future for the congregation.  Mr. King has the universal love and confidence of this people.

A few incidents in his life will indicate his character as determined man of integrity.  For example, although he does not remember when in his childhood he began the use of tobacco and although he had become a slave to the habit, on September 10, 1889, he deliberately quit the use of the weed and has never touched it since.

(sketch continues but is hard to read)

Posted by Marie Cooke Beckman at 10:34 PM No comments:

That cousin is a 2nd Cousin once removed to me and my siblings.  My brother and sister get a substantial amount of the DNA she shares with this cousin.  However, I get a much smaller amount and that amount is low enough that Ancestry applies Timber and it shaves an additional 19cM.

I also see this in my Cook(e)/Putman line where my brother shares a much smaller amount with several of our 2C1R than my sister and I share with them.. 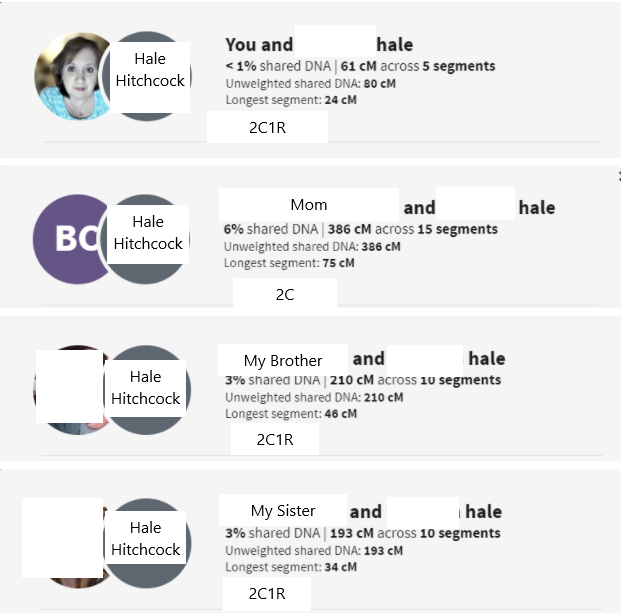 Posted by Marie Cooke Beckman at 10:50 AM No comments:

I think the long generations in my family may have thrown this off a bit.
My parents were born between 1930 and 1940.
My Grandparents were born 1888-1899.
My Gr Grandparents 1853-1875
My 2nd Gr Grandparents 1808-1820
My 3rd Gr Grandparents. 1772-1800(There are 2 in my patrilineal line I have not yet identified)
I have not identified any North African ancestry though multiple companies have shown some trace amounts and ancestry similar to Sephardic Jewish.
Their white paper on the process is available here
Notes that show in "mouse over" bubble for each of these:
You most likely had a parent, or grandparent who was 100% British & Irish. This person was likely born between 1910 and 1940.

Posted by Marie Cooke Beckman at 10:33 AM No comments:

Email ThisBlogThis!Share to TwitterShare to FacebookShare to Pinterest
Labels: 23&me, timeline

Clues from a Query in an Old County Quarterly

Older quarterlies for areas of interest are often an overlooked resource.  I've been reading some Granville Co NC Quarterlies online and noticed that another researcher was interested in Thomas Abraham SMITH and Elizabeth HIGHT.  This researcher placed a Query in the Spring 1995 quarterly asking about Thomas Smith---more specifically who were his parents and what happened to his children.  This interested me because my siblings and I have a group of people we match along with other descendants of  our 2nd Great Grandparents, Wm Clifford Cook & Elizabeth Putman.  This group of unknowns all seem to be descendants of John Hight and Eleanor Nichols.

Wm Clifford Cook's parents are unknown so it is possible that the Hight connection might be somewhere back in his parents' ancestry.  The original poster didn't state her exact connection but I was able to find an obituary for her(she passed in 2016) and determine that she was the 4th Great Grandchild of Thomas Abraham Smith & Elizabeth Hight Smith using information found in that obituary. The query also gave some addition details that I had not yet found which I can add to my research on that group..

Posted by Marie Cooke Beckman at 10:22 PM No comments: