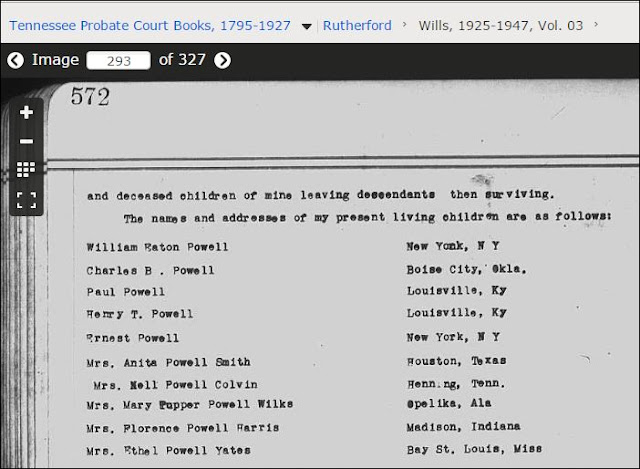 
Reading thru the Probate Records of Rutherford Co TN and I happen to find a will that was written by a resident of Louisville KY, William D. Powell.   Looks like it was proved in Lee Co AL in July 1934.  It provides a full listing of the living children including the areas where they live.  I was not able to figure out why the copy was included in the Rutherford Co TN records.  I did look for the location of Henning, Tennessee but it is in Lauderdale County which is not near Rutherford County.  I love the detail found in this will too.  Mr. Powell instructs that there is to be enough money put aside from his estate to make a $100 contribution to the Southern Baptist for 3 years.  He also in Item 6 makes a statement of faith.

A check at Ancestry shows that the Probate Papers in Lee County Alabama are extensive
The Ancestry "packet" contains 52 images.

This makes me wonder about his descendants and if they stayed in contact given that he had children who were living in 8 different US states at the time of his death.
Posted by Marie Cooke Beckman at 9:34 PM No comments:

Overwhelmed with the number of matches lately but today I took the time to work the Shared Ancestor Hints and noticed this.

The match in question is genealogically a 5th cousin which this should show.  It's really not thru any fault of Ancestry that it isn't showing correctly.  I believe that it's actually caused by the match's entry for the husband of Annie Rice.  We both have the husband as James Hatfield but the middle initials are different for each of us and the other tree has him living over 40 yrs more than what I have in my tree.  That difference likely caused the comparison tool to think it was comparing two different Annie Rices.  I did check the shared matches and they are my Pittman/Hatfield cousins.  I think the DNA may actually be thru the Hatfield line on this one or there may be different shared segments of DNA among all of us and part may be Rice...some Hatfield and maybe some Pittman.  Be prepared to investigate and see what is causing things of this nature.  Triangulation is necessary if I want to be able to mark the matching segment and assign it to a specific ancestor or ancestor group.
Posted by Marie Cooke Beckman at 9:59 AM No comments:

An example of why we must ALWAYS check the image.

Digging thru Riddles in the Warren Co TN area I was reminded of why you should always click thru to the image for further examination. 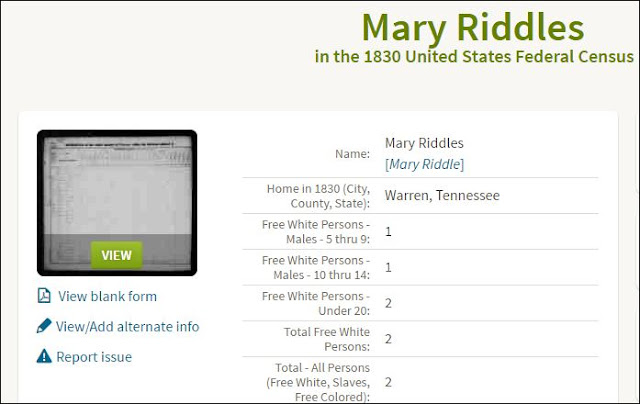 Reading the index would make you think this household is made up of 2 Males.  That really doesn't make sense given that the head of household is female.  Even if she were a person of color she would be listed in Total All column.

I pasted the column headers in just above the snippet of Mary's entry so you could see how many in each age group and gender were enumerated. (Click image to enlarge)

I left a comment on this entry to make others aware of the omission.

When you think about how many people this information has passed thru it's amazing that we still have any of it.


This particular entry was from the Ancestry Database of the 1830 United States Federal Census.  That database was made using images digitized by FamilySearch of the census pages which were microfilmed by the NARA.  I do not know who indexed the census. Those pages of census data were collected by the census taker from someone in that household(and in some cases probably a neighbor).  From what I understand it was not uncommon for the census taker to collect the data and then write it on the census form later in his best...or sometimes worst handwriting.  I checked to see if the 1830 census pages still exist but from what I can gather the NARA only has the negative photostatic copies for the year 1830. [1]