How are you accessing your AncestryDNA results?

If you have taken an AncestryDNA test and are viewing your results exclusively thru the AncestryDNA app you are missing out on the full experience.  It's easier for some of us who access our results thru a personal computer to forget that there are many who don't do that.  It's hard to compare results with other matches as well if you are not looking at the same layout--especially if you in one state(or country) trying to explain to someone in another place who is not seeing the same thing you see because they are using the app and you are seeing the Desktop version of the website.  So now one of my first questions that I ask other matches before comparing is how are you accessing your results?

There is a workaround for those who do not have a computer.  Using the browser on your device, view as desktop site.  Directions on how to get to that option in Chrome are in the image below. 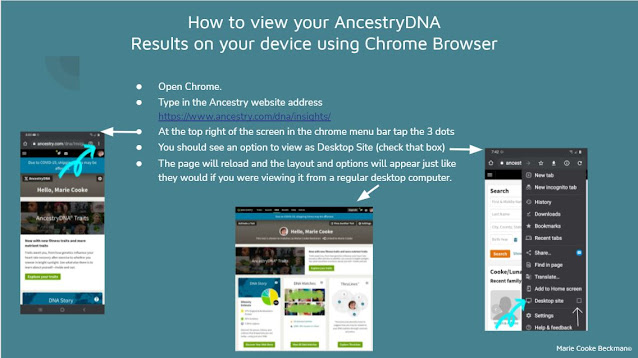 It's also easier to get to the Sharing preferences when you are viewing it as a desktop site.

We should not forget that some people do DNA tests merely for ethnicity results and have no desire to actively research their family history.  Too, there are others who don't realize there is more to it than just the ethnicity results especially if they don't see the desktop site view.  So if you have never seen your results other than in the app or mobile view, I challenge you to try just once.  You might like it.  If not, nothing lost other than a few minutes of your time.

Posted by Marie Cooke Beckman at 10:27 AM No comments:

The divorce petition from Sally Cook that I posted about in my previous post left me with a number of questions. It was granted as shown in the image above. Who were John F Cooke's people?. With a Cook "brickwall" in this area and time period I need to know so that I can sort through the families.
The Francis Cook marriage to Sally Mosby in Mercer Co KY has to be John F Cook and Sally Mosby/Mosley as the date of the bond is the day before their marriage date which she mentions in the divorce petition.

Where is Sally in the 1820 Census. My guess is that she is in the household of family there in Rutherford Co TN because I do not see her listed in a household by herself. The signed statement about John F Cooke going off to parts unknown is made in July 1820. In May of 1820 John F Cooke is a witness to an indenture that was made in Sept of 1815 Between John Mosbey and James Will. (Mosbey is given as Mosley in Marsh's Land Deed Genealogy of Rutherford Co TN Vol 3 (1819-1823) pg 87 (Pg 426 Doc 331 of Rutherford Deed book)

The land that Sally mentions that she inherited was land she received as an heir of Samuel Mosby/Mosley(see link below to valuations of all of the lots 1805) https://www.familysearch.org/ark:/61903/3:1:3Q9M-CSKX-K3ND-C?cat=255153

Who are two children mentioned by Sally in the divorce petition?
I found a few other researchers who had Sally and John in their tree and an interest but they did not have the divorce in their records.

There were some clues that Sally likely went back to Mercer Co KY. Also a note that John Francis Cook died in 1826. It calls him John Francis Whiting Cooke and names the children as
Also in Mercer Co KY a Buckner Miller and Robert Mosbey make bond 18 Dec 1826 for a marriage between Buckner Miller and a Sarah Cook.  I believe that those who have researched this Sarah Sally Mosby Cook do not know about the divorce and are using the date of her marriage to Buckner to estimate a time of death on John Francis Cooke.
https://sites.rootsweb.com/~kygenweb/kybiog/boone/grant.jf.txt

Most of the trees are "Frankenstein" in nature but it appears that John Francis Cooke might have been a son of John Esten/Ester Cooke and perhaps a grandson of Mordecai Cooke 1708-1757) There are SAR files using the lineage of William A Cooke---John and Sally and John's father John Esten Cooke.
I'll likely add to this post as I make more discoveries.
Posted by Marie Cooke Beckman at 6:48 PM No comments:

I'd sent off for a copy of this 1822 TN Divorce Petition not only because it is near the area where my Cook(e)s were but because of my interest in Hardy Pope who signs the statement for the petitioner.  There is a Hardy Pope among purchasers at the estate sale of Joseph S Cook(an estate over which my known 2nd Great Grandfather Wm Clifford Cook was appointed administrator)  TSLA sent the images files to me yesterday.  At this time there is no proof what relationship W C Cook was to Joseph S Cook. I can't tell from this document if there is any connection with either Joseph S Cook or Wm C Cook. Below is my attempt at transcribing the files of the petition.  There was pretty much no punctuation and I kept the line breaks of the original documents.
Read more »
Posted by Marie Cooke Beckman at 3:00 PM No comments:

I've had copies of the Rutherford Co TN Court Minutes pages concerning the divorce of my Great Uncle Clarence Cook and his 2nd wife Daisy for awhile but just recently went searching for the case file.  The full documents are on FamilySearch in the Rutherford Co. Tennessee Chancery Court Record Files and was filed in February of 1935.  They contain a lot of details and a major typo in the marriage date that gets carried throughout the entire record.  I have no idea how the error could have gone unnoticed as it causes the marriage date to be AFTER the separation date.(see dates marked with 🌞in snippet below)  Their correct marriage year is 1925 and not 1930. I have a copy of their marriage record.  No time traveling required.  Just an example of why it's important to collect every document you can about an event. 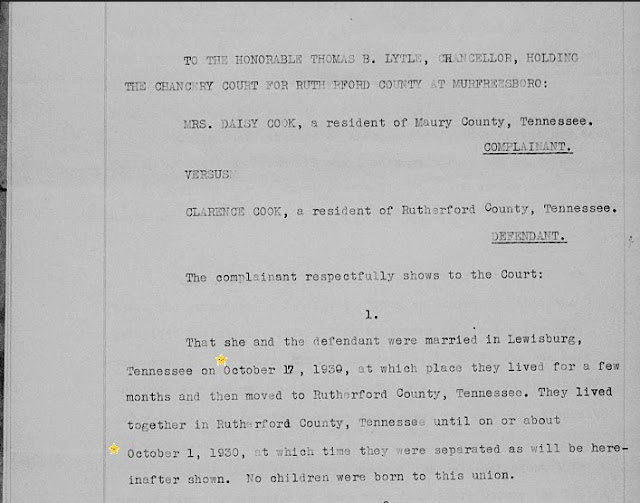 Posted by Marie Cooke Beckman at 12:37 PM No comments: