A few observations about Tennessee resources at Ancestry.com


This is a screen shot from the Ancestry.com app on my phone.  While this is not my Wm. T. Hale who died in 1861 in TN it still bugs me to see this.   The top hint is from the Mortality Schedules and the one under it is from the Mortality Schedules index.  I have pasted the notes about both sources below the image.  Both Hints refer to the same person.  While I have atDNA tested with Ancestry and am awaiting the results I do not have a subscription and cannot tell if the records set allows the user to note the year error on the published Index.  Wish there had been some way that Ancestry could have fixed this but I guess showing both and hoping that the researcher will investigate is the best that we can hope for...not only in the online tress but also in the records.  Still I am grateful for any clues about my ancestors.

Tennessee residents are lucky to be able to access a few of Ancestry's Tennessee record collections via the Tennessee Electronic Library.  I was able to find my Paternal Grandparents's Delayed Birth Records.  They were born between 1888-1891 and TN did not require Birth Records at that time 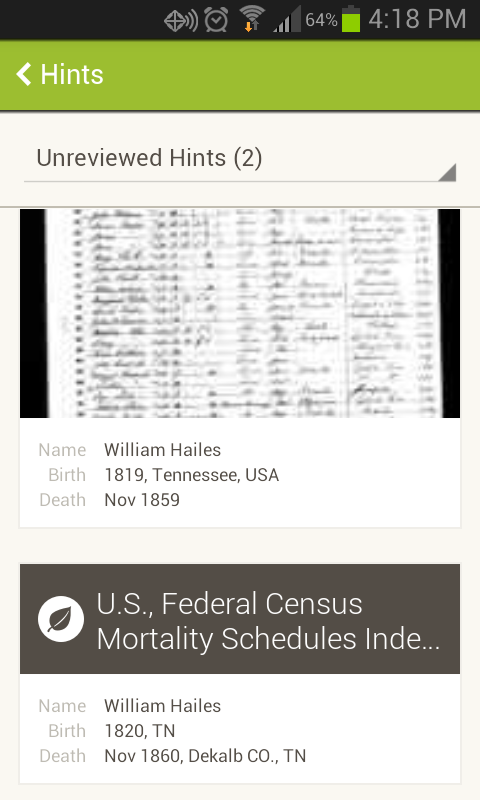 Ancestry.com. U.S., Federal Census Mortality Schedules Index, 1850-1880 [database on-line]. Provo, UT, USA: Ancestry.com Operations Inc, 1999.
Original data: Jackson, Ron V., Accelerated Indexing Systems, comp.. AIS Mortality Schedules Index. Compiled and digitized by Mr. Jackson and AIS from microfilmed schedules of the U.S. Federal Decennial Census, territorial/state censuses, and/or census substitutes.
About U.S., Federal Census Mortality Schedules Index, 1850-1880
This database contains the following mortality schedules: (snipped)....Tennessee 1850, Tennessee 1860, ..... (snipped)
Included in the 1850, 1860, 1870, and 1880 censuses were questions regarding those who died in the twelve months prior to the enumeration. They list persons who died between 1 June and 31 May of the year prior to the census. Even though these lists of deaths are widely believed to underreport actual numbers of deceased, this is still a valuable source of information. In many states where vital records were not kept it provides a nation-wide death register for five years between 1849 and 1880. The schedule lists the deceased name, sex, age, color, widowed or not, place of birth, month of death, occupation, and cause of death. In 1870 the parents' birthplace was added.
Posted by Marie Cooke Beckman at 10:23 PM No comments:

It is a mystery to me why my Grandfather, William Richard Luna, was born in Fulton Co. KY.  Why was his mother in Fulton Co.  We have no known family connections there.  His mother Nancy Florence Pitman Luna's  lines were in Dekalb Co. TN along with her husbands lines.  I thought maybe that my Great Grandpa might have been there for work but that would not explain why my Great Grandma was there.  This would have been in March/April of 1892.  Another example of when the 1890 Census could have really helped me out.  This article won't solve that mystery for me but I found this snippet of local news from The Hickman Courier entertaining. 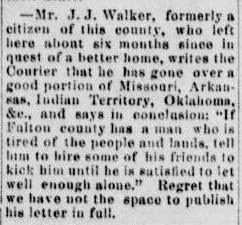 I received my Ancestry DNA kit this last week and took the test, mailed it and activated it on Ancestry's website on the 13th of this month.  In the mean time I have been trying to keep busy and not think about it too much.  I know....Good Luck with that.  In an earlier post to my blog I gave it my best guess on what I think my ethnic breakdown will be.  I am really looking forward to comparing the results with my tree.  Barring some kind of crazy find in the one line that I don't have back further than my Gr Gr grandfather I am pretty much colonial American with those lines coming out of Maryland and Virginia in the 1600 & 1700s.  By 1800s most of my lines were in Tennessee, USA with many in the area just prior to the formation of the state in 1796.  This has got me thinking about DNA research for areas.  I know there is a tool where you can take your DNA results and compare surnames but is there a tool available to the public where you can compare areas of the USA during more recent times that would be helpful to those looking for adoptions and non paternal events within the last 200 or so years.  Using both the Location & Surname together could help.  Something similar to a surname study but for a specific region.  If so I would be interested in a Colonial American one and also Early TN Settlers. Just some thoughts.
Posted by Marie Cooke Beckman at 11:34 AM No comments:

Who do I think I am?

I have been wanting to do DNA testing for awhile now.  Last week I ordered an Autosomal DNA test from Ancestry.com which I will take and mail back this next week.  In an effort to make an educated guess about the outcome I have made a list of my 32 GrGrGr Grandparents(all but 2 of them are known surnames)


I examined the last names and determined from which part of the world they came.  The break down is shown below.


I multiplied the amounts by 3.125(100/32) to get the %
I realize this is somewhat flawed not just because I don't know the ethnic background of the two unknowns but in most cases do not know the ethnic background of these GGG Grandparents mothers.  My Hatfield's mother was said to be Cherokee(I don't think her mother could have been more than 1/2 ) but I have no way of knowing how much so I didn't take that into account since her father was an English Hatfield.

I am not sure how Ancestry has their grouping now...but to me looks like I am 90.625% British Isles.  When I get the results I will post them so that I can compare to my guesstimate.  Too it might also depend on how much of each of the genes I received.   Those aren't always exact even in siblings.
Posted by Marie Cooke Beckman at 9:32 AM No comments:

A Tennessee Researcher's disappointment with Finding Your Roots episode

Just now catching up on my DVR'd episodes of Finding Your Roots.  Was disappointed that when they showed Steven King's ancestor's Civil War card, Steven read it as Born in: Kent Co. TN when it was so obvious to me that it was Knox Co. TN.  At first I thought Steven had just pronounced it incorrectly...but then I saw the note card where they feature the run down of the info they had found and they had written it as Kent Co. TN.  I don't understand several things...first off why did they not catch their error when they consulted map or gazetteer and secondly why did they not call in someone who worked extensively with TN records.  Why was this not done prior to the revealing to Mr. King?  Still love the show...but disappointed.
Posted by Marie Cooke Beckman at 3:11 PM 1 comment:

Sadness in the Census.

To the ordinary eye this may look like just a typical page from the 1940 United States Census. This page to a country music fan and a true crime fan is much more.  Seven year old Dorthy Marsh in household 27 would grow up to be Dottie West.  Dottie was physically and sexually abused by her father, Hollis Marsh(a crime for which he was sentenced to 40 yrs in prison).  The Bratcher family in household 33 would be murdered by Billy Gibbs in 1955----a tragedy still talked about among the locals even to this day.


Posted by Marie Cooke Beckman at 2:39 PM No comments:

A follow-up  to my post of last weekend.  I have checked my Maternal lines and found 3 lines that served in the Revolutionary War.  This gives me a total of 10 lines I could use for DAR membership.  There are several of my Mom's lines that I do not have back beyond late 1700s

Rev. War Ancestors from Mom's side

If you are interested in checking to see if any of your ancestors are listed visit DAR Website.
Posted by Marie Cooke Beckman at 8:18 PM No comments:

Spent a little bit of today checking my ancestors to see if any of the Revolutionary War Ancestors were listed on the Daughters of the American Revolution site.  I knew I had "old" blood as I know all of my GGG Grandparents were in America before the Revolution(with the exception of the Cook line which I only have back to early 1800s)  I have finished checking lineage through my paternal lines and I have 7 lines I could use for membership.  The easiest to prove would be my lineage to Nathan Frizzel/Frissel.  Someone has already proven this line to my Gr Gr Grandparents.  I have my Great Grandmother's Death Cert. which has their names on it. as well as census info showing her in their household listed as their daughter.  Interesting and I may try this some time down the road.

So far these are the Rev. War Ancestors from Dad's side

If you are interested in checking to see if any of your ancestors are listed visit DAR Website.
Posted by Marie Cooke Beckman at 5:47 PM No comments: