I certainly need to further investigate this.  I have two ancestors named Andrew McElroy--my 3rd grandfather(Andrew J. McElroy) and his father, Andrew McElroy who would both be in that area of Tennessee.  I don't believe it would have been either of them.  It certainly couldn't have been Andrew J. McElroy who would have been about 1 year old otherwise I would not have been here.  I do have a death date for his father the elder Andrew McElroy and it is June of 1864--some 43 years after this was published.   That date comes from a short bio written about his son, Andrew J. McElroy who was a state senator [pages 262-263 of Compendium of Biography--published by Ogle Co. 1898.]. It seems likely that these are somehow connected to mine because of the name and the area, especially given that Andrew McElroy's wife was Martha Shropshire. 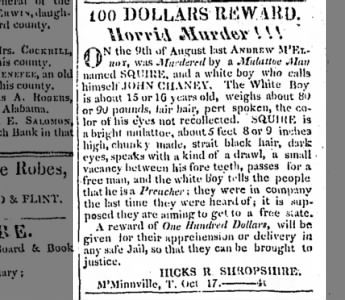 I found the two names together in 1825 White Co TN on the tax list 4 years AFTER the article.  Is there another Andrew McElroy?  I know that descendants of the elder Andrew McElroy have continued the name but wonder if there were two in this area during that time period and if not, why was this ad posted.  There is a Hick Shropshire that dies in TX in the late 1830s.  Would love to know more about this.  Perfect excuse to make a timeline, as if I needed an excuse. 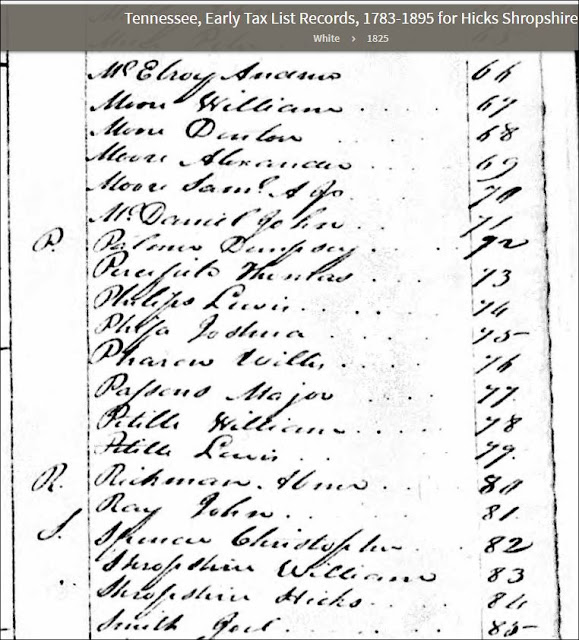 Posted by Marie Cooke Beckman at 10:57 PM No comments:

Image comparison of North Carolina Will

The State Archives of North Carolina recently blogged about a new digital collection--the Secretary of State Wills.    I wondered if some of these were in Ancestry's collection and thought about comparing the images.  I have taken a snippet of the very same section from the will of William Cook probated in Northampton County, North Carolina in 1758.  Below are the snippets of the image from the Secretary of State Wills database and the one from Ancestry's Wills and Probate Records Database.

I did attempt to find the images at FamilySearch in the Northampton Co Probate which covered the year 1758(most started in 1760)  but did not find it thru browsing or searching. It may be there but I was unable to find it.  I thought maybe the image at Ancestry might have been an FHL scan but the source notes and citation didn't mention that as they normally will if it is from the FHL images.

The image seems to have had some tweaking for readability at the Archives website.  This just happened to be the one I was interested in viewing. There may not be that big of a difference with other images.   Your mileage may vary.  Sometimes images will be more clear at one site than they are at another.  No one said that you couldn't use BOTH sites. 😊
Posted by Marie Cooke Beckman at 6:58 PM No comments:


My Dad's older brother, Morris Cooke enjoyed bowling.  A search on his name at Newspapers.com included this entry from a 1959 Tennessean.  I believe Granny and family were living on East Greenwood Avenue in Nashville in 1959. 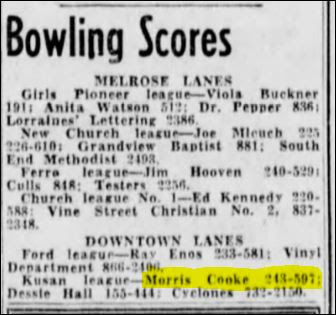 Posted by Marie Cooke Beckman at 5:06 PM No comments:

As researchers, we are always searching for more information about our ancestors.  I've noticed that particularly in the early 1800s there were notices or advertisements offering rewards for the capture or information about military deserters.  These notices give descriptions:--build, clothing and habits.   It might not be where you would prefer to find your ancestor, but It could be the only time that you will get a detailed physical description in that time period.  I couldn't help but be amused by the description of Martin Seabine. 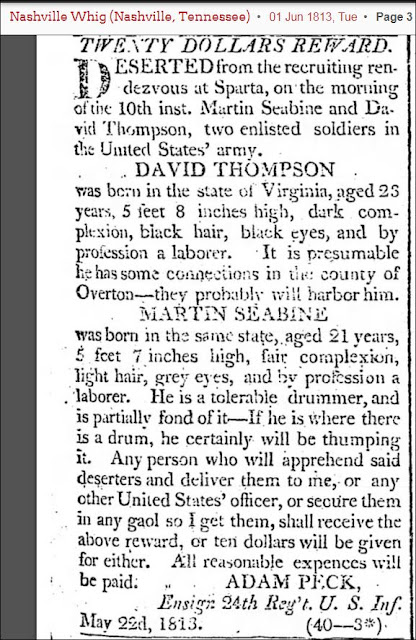 Posted by Marie Cooke Beckman at 11:57 PM No comments:

Account of the Sale of Items that were part of the estate of William Ogilvie deceased.
Only includes items not bequeathed to those named in his will.
May 10th, 1813 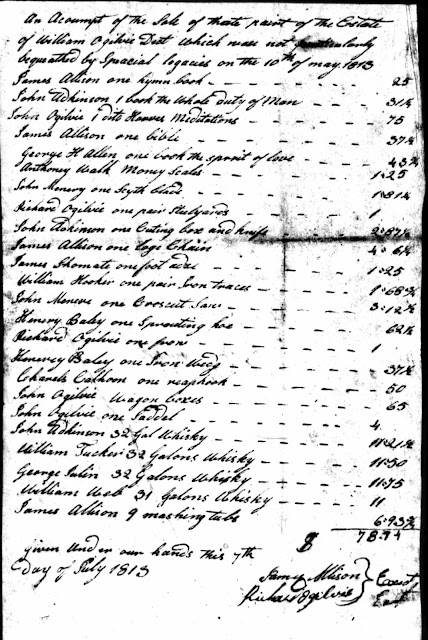 Know the contents of the Database

This record is from the Williamson County TN records According to the blurb on the database, Williamson TN Records include: (Divorce Files, 1900-1950; Divorce, Probate, and Other Records, 1800-1899; School Censuses, 1838-1918; Miscellaneous Records (ex. Apprentice, Land Sales, Liquor Licenses, Slave Records); Birth and Death Records, 1920-1939)

At one point if you added a record from this database it would show as a DIVORCE(something I'd blogged about) but it appears this is no longer the case.  I was able to create a Probate FACT and link the image from that FACT within my Ancestry Tree.

Note the persons purchasing from estate sales as they are generally family, friends, associates or neighbors of the deceased.   Cluster research or the FAN club principle(a term coined by Elizabeth Shown Mills) refers studying an ancestors friends, associates, and neighbors in order to learn more about your ancestor's life.  There is an excellent lesson showing the use of this methodology located on her Evidence Explained website.

Now to add these people to the notes section of the FAN Club portion of William Ogilvie's entry.  When I find the relationships for each of these persons to the deceased I'll add that in my notes and hopefully remember to post an update.
Posted by Marie Cooke Beckman at 8:39 PM No comments:

In a previous post,  I wrote about finding a David Pittman in court for illicit distilling.  I'm not sure if this case went on for awhile or if there were additional charges.  It appears to have been continued several times with him eventually getting 30 days in jail in May of 1876.  In October he is again mentioned but it is shown as "no action taken".  I wonder if that may have been where they checked to see if he had served his sentence.  I would imagine he had or there would have been further action needed. 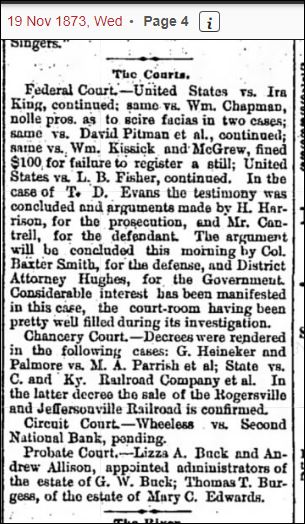 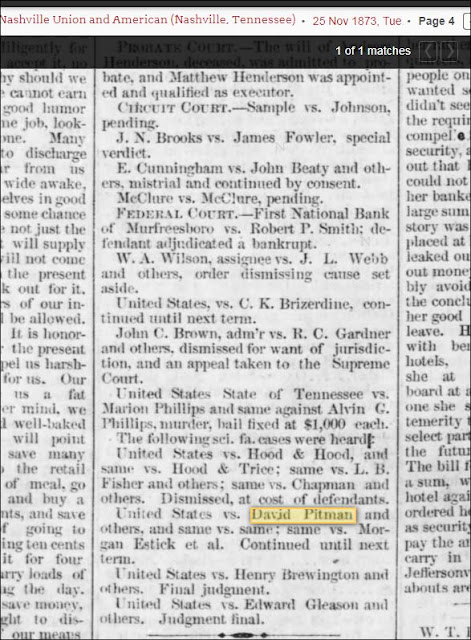 25 Oct 1874  (forfeiture) Click on the date to see view the previous post that started me looking for more on this case. 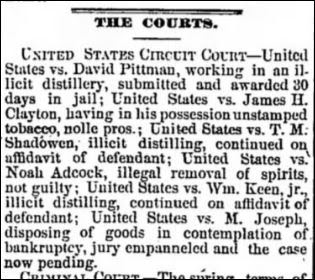 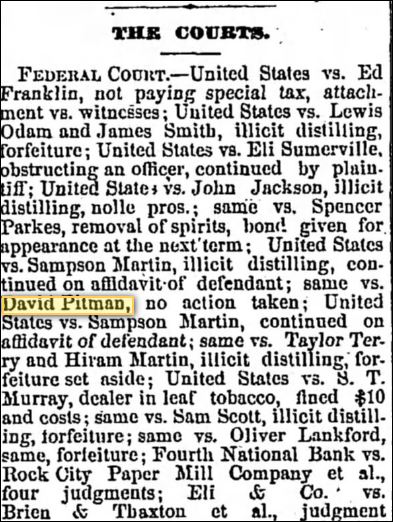 These clippings and other newspapers available thru subscription to Newspapers.com.

Posted by Marie Cooke Beckman at 12:00 AM No comments:

The following clipping is from the Murfreesboro TN newspaper article listing those in attendance at the Cook reunion in Longview. 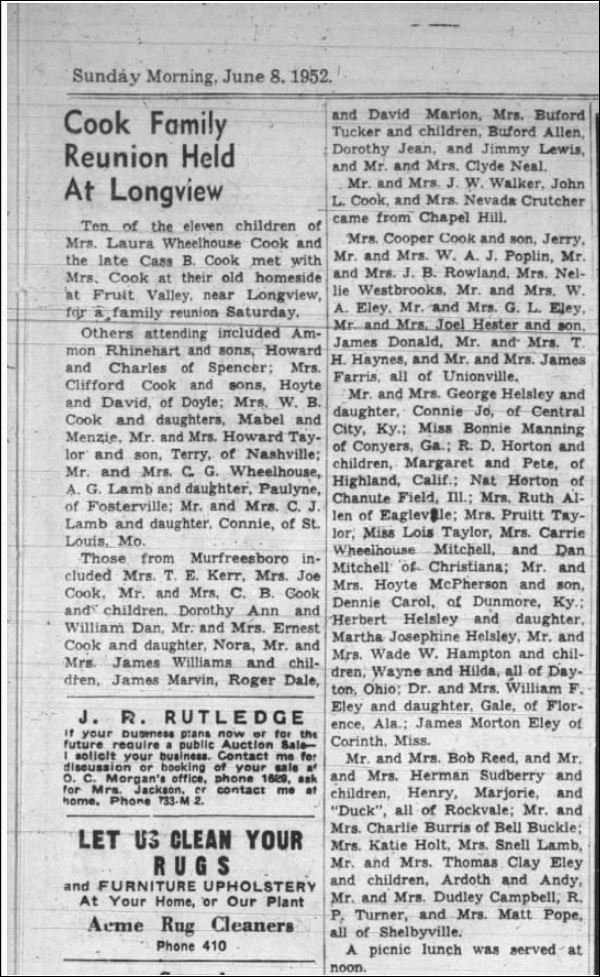 Posted by Marie Cooke Beckman at 10:46 PM No comments:

My Genes For Good DNA results are in

In mid-August of 2017,  I took the Genes For Good DNA test.  I received notification that my results were in today.  If you are interested in participating you can find out more information on it HERE.  It doesn't cost anything but the time you spend taking the studies.  Click on any of the images below if you need a closer look. 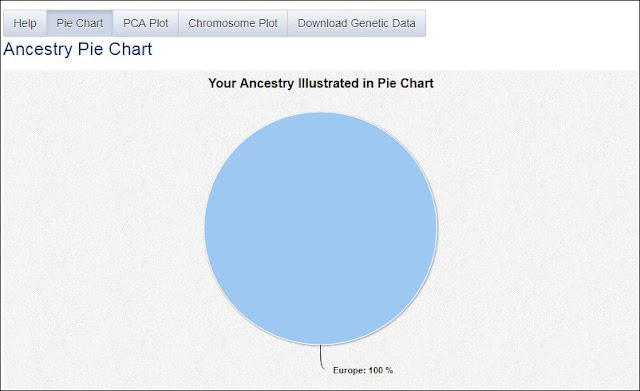 This is pretty much what I expected as it is a study that deals more with health.  I had already tested at AncestryDNA about 3 years ago and had uploaded those results to FTDNA, MyHeritage, DNALand,  and GEDmatch. 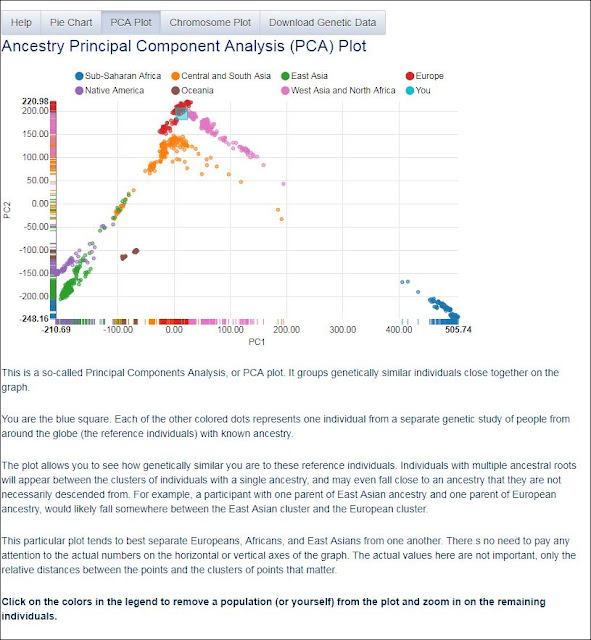 The above section shows how I compared to others who tested.  I am the blue dot. 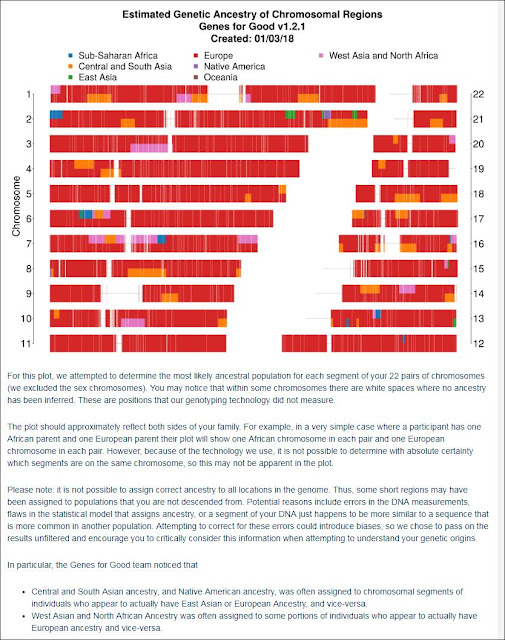 The above image shows their Estimated Genetic Ancestry of Chromosomal Regions.  Not as detailed as the Chromosome Paintings in the Admixture section at GEDmatch but I think it will interesting to compare the Non-European portions to those I get when I run my AncestryDNA results I uploaded to GEDmatch thru some of the admixtures utilities available there.

They do allow you to download your results, however, you are required to answer a survey and enter an access code before doing so.  I was able to run my results thru Promethease.   I didn't expect them to mirror the results of my AncestryDNA analysis at Promethease but it was pretty close.  I have Retinitis Pigmentosa which  Promethease identified this as Age-related Macular Degeneration when I ran my AncestryDNA results. The analysis of the Genes for Good kit was no different, down to identifying the same chromosome.

I have tried to upload to the Genesis portion of GEDmatch but haven't been successful yet.  I hope this article provides insight into what information is available when you test with Genes For Good.

Posted by Marie Cooke Beckman at 5:30 PM No comments: 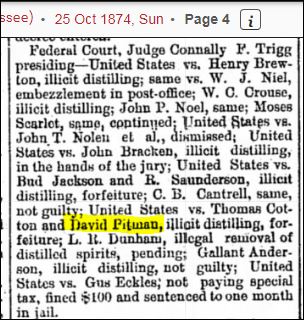 I believe this is my David Pitman for several reasons: The Thomas Cotton listed with him lives in White Co TN just over the county line from David Pittman, who lives in Dekalb Co. This is the same Thomas Cotton who served with him in the TN 16th Infantry(Confederate). Additionally, the L. R. Dunham is likely kin as David had 2 Dunham brother-in-laws as well as an Uncle by marriage who were Dunhams. I had heard family talk about the Pittman family having been involved in making liquor.

Federal Court would have been District Court in the Middle District.

21.45.3 Records of the U.S. District Court for the Middle
District

Looks costly to order copies. Need to see if I can find another mention in the paper.
Posted by Marie Cooke Beckman at 8:57 PM No comments:

I think this is a good illustration of the randomness of DNA.   I'm comparing Me, my sister, and my daughter to my paternal aunt(my daughter's maternal great aunt.)  Click on the image to enlarge. 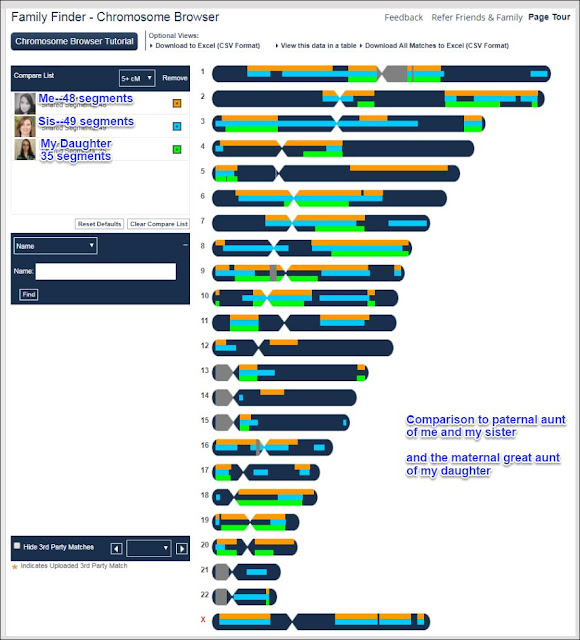 The above segment matches are of segments matches which are  5cM or highter  on the FTDNA chromosome browser.  I've uploaded to GEDmatch and can do One To One comparisons.  I'll be able to run a list of matches and other comparison reports once it batch processes.

For more DNA tools and reference click on the link in the blog menu at the top of the page (DNA Tools & Reference Links)
Posted by Marie Cooke Beckman at 12:51 PM No comments: