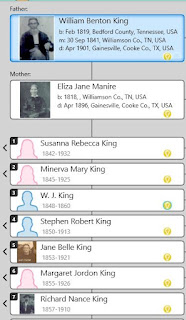 About two years ago I wrote a series of blog posts examining the 1st cousins of my paternal grandmother-- one covering her paternal 1st cousins, and another her maternal 1st cousins.  I'm now finally getting around to writing about my Paternal Grandfather's 1st cousins.  This post focuses on his maternal 1st cousins which would be the grandchildren of  William Benton King and Eliza Jane Manire. My Grandfather Thomas DeWitt Cooke(b. 1888) and his siblings descend thru William and Eliza's daughter, Jane Bell King Cook.  Known Ancestor surnames include Brandon, Harris, Jackson(2), King, Lambert, Manire/Manier, Ogilvie, Patton, and Upshaw. Tom has about 26 maternal 1st cousins  These cousins' dates of birth span the years from about 1866 to  1907 so it is likely that he may have known many of them.  While some of them moved to Arkansas, Illinois, Missouri, Oklahoma or Texas, the majority stayed in Rutherford and Bedford County.

I've used census records, death certificates, obituaries, wills, etc. and welcome any corrections.  So... if you are in this branch and can offer any help in untangling I'd be more than glad to hear from you.