In a blog post from August 10th I mentioned Tennessee Delayed Birth Records and the county court orders in the supporting evidence section of those records. If you are researching people who were born between 1880 and 1900 the birthplace information can be very insightful. Given the 20 year census gap caused by the loss of the 1890 census this information really helps when you don't find your folks in their usual location. I was looking at the children of Richard Nance King and his 1st wife, Parrie Elizabeth Cook. Richard is the younger brother of my great grandmother Jane Bell King Cook and Parrie is the niece of my great grandfather William Green Cook(Jane's husband).  I am using the MyTreeTags™ tool in my tree at Ancestry to note that there is a double relationship with their descendants.

In finding the TN Delayed Birth Record for their son, Joseph Knox King, I discovered that the family, or at least Parrie was in Greenfield, Weakley Co TN at the time of Joseph's birth(11 July 1886.)  His maternal Aunt Ella Cook Martin gave a statement that she knew when he was born.  She was 15 at the time of his birth.  His delayed birth record also lists the Cook Family Bible as supporting evidence.  I wish it would have mentioned who had possession of the bible at that time(Aug of 1942) and which Cook bible.

It's somewhat amusing that the instructions along the side say to "Use Typewriter or write plainly with unfading ink" but doesn't mention not to use fading ink for typing. 😃 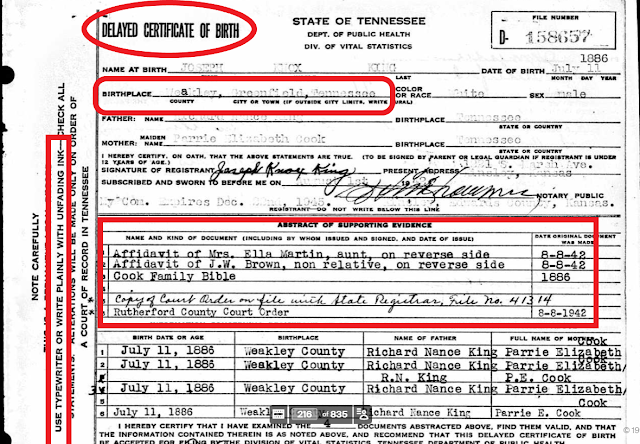