A Visual Representation of my Pedigree Using Puzzilla

I hadn't used Puzzilla in awhile and someone had mentioned it in a group I'm in so I thought I would check it out again.  The site works in conjunction with FamilySearch  and I used it to get a visual representation of where my tree needs work.  They offer premium services but I just use the free basic service. I did have to make some corrections as the FS One Tree did not have some lines and had others that were errors.  For this chart I focused on the 2nd & 3rd Greats in my tree and most of those have birth years between 1750 and early 1800s.  I did a screen capture and used editing software to identify the areas where I need more research.  I was aware of these areas but it is nice to see them represented in a single image file.

Cook:  YDNA tested to the Y700 level Most closely match descendants of Shem Cook out of Granville Co NC who descend thru his son James.  We could also match the other sons I just have not seen tests from descendants of them and there is no easy way to find out if someone with a line of descent from them has tested unless they are using WikiTree and marking it there.

Pittman:  YDNA tested to the Y700 level Within the project we are Group B Pittmans which are sort into the East Coast USA and Essex Co, UK Group

Curvin:   I'm not sure if anyone has attempted much research on as it's a female line from SC prior to TN and some folks just find that scary.  I did see some among my atDNA matches at Ancestry so there might be some opportunities there.

Hale:  I really need to work on this line.  I think maybe one of my cousins who is a direct male has tested at 23&me and I might be able to do a little comparison with those in the Hale YDNA project.  There is much family lore on this side but this is the group that hid from the census taker during the reconstruction years. 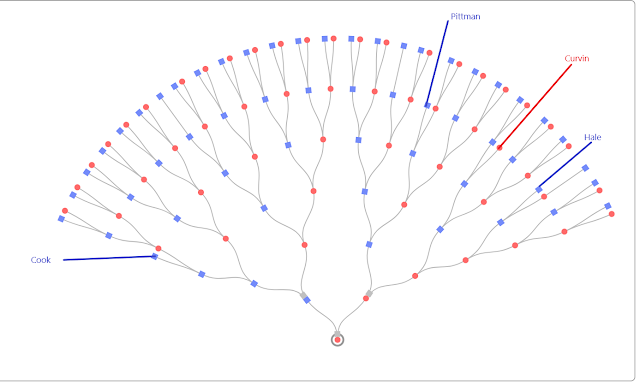