Source:  Above information from the obituary than ran in the Britton Weekly Sentinel(Britton, OK) 7th May 1914 which can be viewed in digital format at Newspapers.com https://www.newspapers.com/clip/112143371/obituary-of-ruth-king/
Additional information:
Ruth's sister, Eula brought Maud back to Tennessee to live with Ella Cook Martin.  Ella was Parry Cook King's sister who had raised Ruth after Parry's death.  She also raised Maud.  Eula returned to OK and died a short time later.  Ruth, Eula and Dan all died of tuberculosis and are all buried somewhere in Britton OK.
Source Additional information from Charlotte Ralston whose source on this line was Maud Bond Hailey Thomas.

I did find Ruth's listed at FindAGrave in Britton Cemetery however it looks like it was added from her death notice and their is no picture of a stone.  I don't know who would have records of the cemetery.  There is a Stone monument that contains some history of the cemetery located here at FindAGrave.

From the ok3explore.health.ok.gov website:
Earliest OK death record is 1908 however, vital records weren't required by law until 1917. 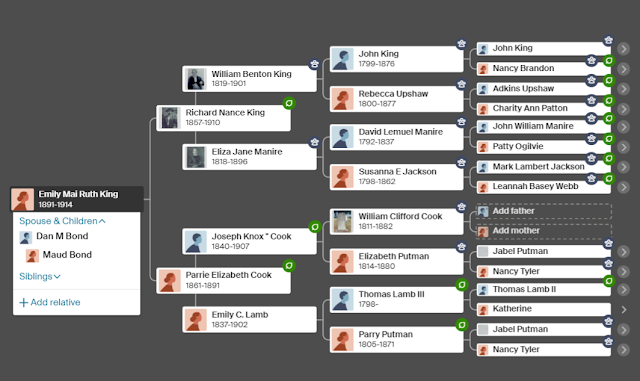 This is Ruth's pedigree She, her full siblings and her descendants are kin to me  thru the King line, Cook line with an additional line of the Putmans.  You can get a visual of it by looking at the Thruline icons(the gray ones)
Posted by Marie Cooke Beckman at 1:31 PM