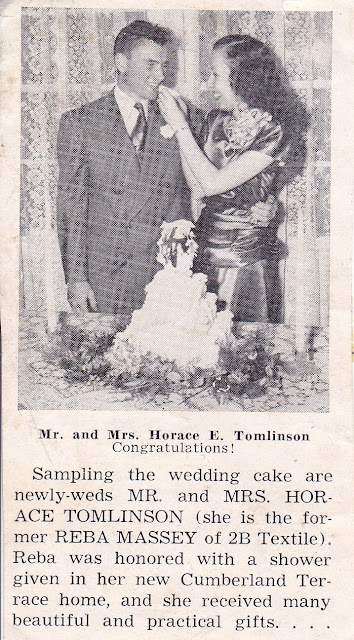 This article was in The Old Hickory Record a company paper distributed by DuPont .  Presumably this would have been published in late Sept / early Oct edition as they married September 25, 1948.  My Grandmother saved newspaper clippings of people she knew.  This was one of them.

Reba's parents were Earnest Lillard Massey and Effie Mai Glover Massey who lived on Hadley Avenue in Old Hickory and can be found there in the 1930 & 1940 US Federal Census of Davidson Co TN(Dist 4 Old Hickory).  At that time my grandparents, Tom D. & Pearl Jakes Cooke,  lived at 911 Dodson Street.  That residence no longer exist and has been gone since at least the early 70s as I remember when we would drive down Dodson Street on the way to my paternal Aunt's house(on DeBow St.) Dad would point out that the house they lived in used to be at that corner lot.

In my earlier post about folks who lived near my grandparents when they lived on Clarke Street in Old Hickory my goal was to identify the persons in the pictures from that time period.  Now I've come up with all sort of questions about that time period and place.

Do any of these DuPont Company papers still exist?  Are they in an Archive?