This post is a continuation of my previous post about my Dad's paternal 1st Cousin, Margaret Ruth Thompson Cooper.  If you haven't read that earlier post and click on her name in the previous sentence.  I'm going to refer to her as Ruth because that is what my family always called her.  On Ruth's death certificate it lists her legal residence as 129 6th Avenue South, Nashville, Tennessee.  I'd never been able to find Ruth thru a search of the census so now that I had the address where she was residing in 1941(and also listed there in 1940 directory as mentioned in the earlier post), I took that information and went looking for the Enumeration District for that address using the Steve Morse Census Tool.
From locating the address on a Google Map earlier I could see that the intersecting street was McGavock which narrowed it down to 2 Enumeration Districts.  I then browsed to the first of the two districts mentioned which had 12 pages and read those looking at the Street names.  Nothing...on to the next Enumeration District.  About halfway thru the 20 something pages, I find the address.  Margaret Ruth Thompson Cooper is listed as Margaret Moore.  No wonder I couldn't find her.  This is really odd to me because earlier in the directory for 1940 she is listed under last name Coopermore and the only one listed at the address in the directory. In the Census there are 4 other women who are in their 20s living at the same residence. Three of those women are divorced and one is widowed.   Some answers but more questions.  Are all these Margaret Cooper's the same person? 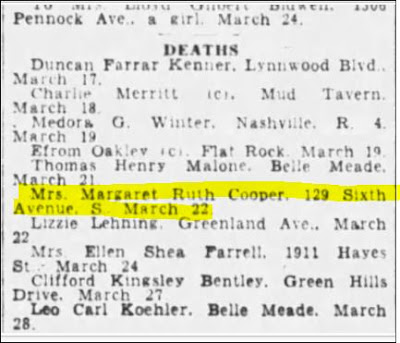 2.  She's listed as divorced in the census AND on the death certificate.  Her former husband B. V. Cooper remarried in 1939.

3.  Why is the name/word "more" or  Moore listed in both the directory AND the census?
Very odd unless she was married to a Moore and divorced sometime in between her 1st marriage and 1940.  Also to have the word more added on the end of her surname Cooper in the directory is odd.  She is noted as the person who gave the info for herself in the 1940 Census. 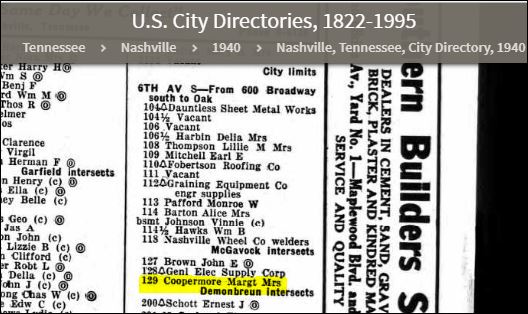 4.  I think my next plan of action should be to look at the other four persons enumerated with her and see if I can determine any connections.

5.  Additionally, I need to find her divorce records from B. V. Cooper.
Posted by Marie Cooke Beckman at 11:02 PM