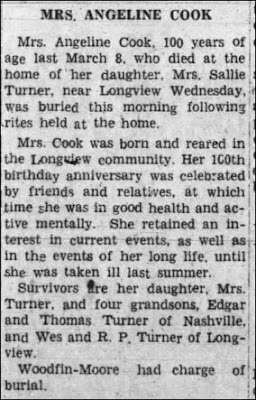 While researching the YDNA of the Cook line I have found a line that connects back to Shem Cook(as our YDNA line indicates) that also named a daughter Angeline and their daughter was also born in 1838 Georgia.

I have several of her descendants which have autosomal DNA tested who match me or my siblings.  I also have a number of descendants of those who attended her birthday celebration who are a match with me and/or my siblings.
Posted by Marie Cooke Beckman at 9:23 PM