Who are you and how do you know my Grandmother? --Part 3

I was searching through a manila envelope that contained letters which my Grandmother had saved from the veteran's administration and from the company from which my Grandfather retired.  As I was pulling out the papers I notice a tattered empty envelope. (shown below) 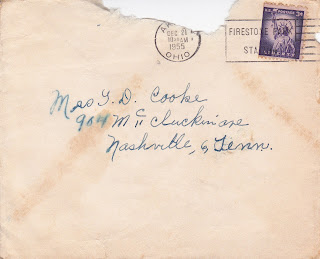 I believe this is the envelope in which the Christmas card that Flora sent to my Grandmother was mailed.  I laid the card on the envelope and it is the perfect size for the card.
That combined with the Postmarked date &  place and the partial name and address of the sender on the back are certainly making it look like that is the case  The handwriting on the envelope also matches that in the card.  Sure it could be from one sent at a different time but given the details mentioned in the letter inside of the card I have very little doubt. 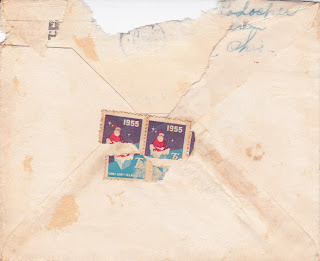 So how close did I come using the directories to find the likely time that the letter could have been sent?  I said  "some time in the period from the publication of the 1954 and the 1956. Compare that to what the post mark says Dec 21st 1955 at 10:30am.

About 10 years back I had looked at all the crumbling envelopes in my Grandmother's collection and noted the postmark and address(the when and where) of where she was.living. She had lived at many different rental homes in East Nashville after they moved from Old Hickory Tennessee.  This address is one that was not on any other envelope I had found.  So now I knew WHEN the letter was sent.  Still gathering more clues on how she might have known my Grandmother.