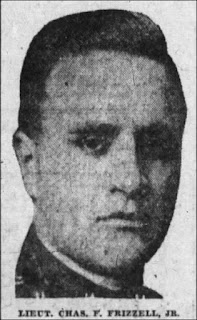 In 1917 Charles was part of the 38th infantry and was promoted to 1st Lt. while in France. He received a distinguished service cross for his services in WWI in which he was several wounded, captured, and detained in a German prison camp. According to his military service card in Ancestry's New York Abstracts of WWI Military Service, 1917-1919, he was involved in the following engagements: Aisne, Champagne-Marne and Aisne-Marne. In 1919, he retired due to injuries he sustained while in service and returned to work as assistant agency superintendent of Royal Indemnity Company.

I was able to find an address for Charles Jr. for May 1950 in Ancestry's Pennsylvania, Veteran Compensation Application Files, WWII, 1950-1966. He filed this because he had went back into the Army from June 1942 to March 1946 during which time he worked in recruiting.  I took that address and Googled it and from there found it on Zillow(a real estate website) which included pictures of the home. It should be the same home, as the description given said that the home was built in 1930. Another address from the September 8th, 1918 edition of the New York Times Union Newspaper(at Newspaper.com) gave an address along with his name among those on the list of Prisoners of War. There is actually a history of that building on a website about New York Architecture. It's really interesting because the building was at one time, Headquarters for The Royal Insurance Company where Charles Sr. was Vice President at the time.

Charles F. Frizzell Jr. and his wife Phyllis Phillips Frizzell had 3 daughters--Phyllis, Rosemary, and Edith Lee.  Charles passed in 1978 and is buried in the Trinity Church Cemetery in Manhattan, New York along with family, and many other notable historical figures.