Thank You, Charlie and Alice!

I frequently blog about the Y DNA line of my Dad and my research attempts to find the connection between my Patrilineal 2nd Great Grandfather and the other Cooks we match which includes the male line of Shem Cooke(d. 1796 in Granville Co. North Carolina)  While I've done some analysis and research of the others we match and looked for others researching those lines it's been a struggle not only due to the Cook(e) surname being a common one but the given names which they use which you would think would be uncommon(Rowland, Claiborne, Shem...), get used multiple times in each generation.  This happens so much that it's hard to figure out the immediate family in which they belong.  It's great when I can find the work of other researchers and see their take on things.  This post is a "thank you" to a number of  those people.

Thank you to Charles G. Cooke who wrote up the information he'd gathered in his self published book, Many Cooke's and their Broth. Charles G Cooke was a descendant of Old Shem thru Shem(d. 1862 Carroll Co GA) and his wife Temperance Blackwell thru their son Rowland Bryant Cook.   He'd published his work in the late 1960s before I was born and abt 20+ years before I began my research.  I first heard about him having published his work almost 5 years ago when I received the results of my brother's YDNA test.  At the time it was a Y37 which had plenty of matches to the Cook(e) Family.  Later I'd upgraded to 67 Marker, 111 Marker and eventually the Big Y700.  As part of my search to learn more about our YDNA line I had searched Ancestry Message Boards trying to find others who were researching Shem Cooke and happened upon mention of Charles' work and thankfully was able to obtain a copy. As it happens Charles G. Cooke was the paternal 1st cousin of my brother's closest Cook(e) YDNA match.  I'd also like to thank that YDNA tester who is deceased although I won't mention his name here.(His test is listed in his wife's name which initially was somewhat confusing)  The Family History library has access to Charles' self-published book. 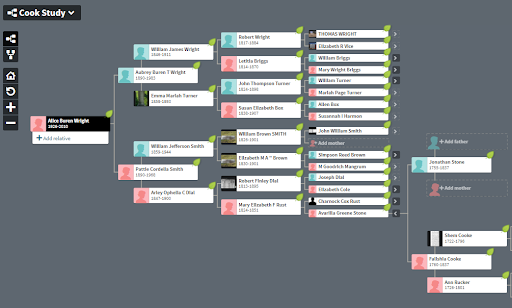 Thank you to Alice Wright Algood.  Alice published her article about Shem Cooke's descendants in a Maury Co TN Quarterly publication in March of 1996. I'd been doing searches for "Shem Cooke" and a Google Alert pointed me to an item that had been on Amazon.  I was able to get enough information about the item to tell it was a historical quarterly.  I took this information and searched on the Tennessee State Library and Archives site to see if they had a copy of the publication.  Fortunately they did and I was able to order a copy of the article.  Alice was a descendant of Shem Cooke(d. 1796 NC) thru his daughter Falicia/Phalisa If you get the opportunity check out Alice's Find A Grave memorial.  She was truly a remarkable lady..

I'm grateful that these people took the time to write up and publish their research.  I've found errors in both works however that in no way takes from the overall usefulness of their publication.  I have access to more records than they had and neither of them were able to take advantage of the information which DNA research provides.  I'm still trying to find the connecting lines for my Cookes and many other of my families but I am so thankful for their published works.  I hope this will inspire the current generation of researchers to write about your research.  Also if you have a common surname, use DNA testing--YDNA, autosomal DNA and mitochondrial DNA (where applicable)

Cooke, Charles G. 1967. Many Cooke's and their broth; [a genealogical outline of the Cooke family of Virginia, North Carolina, Georgia, and Alabama.
Algood, Alice Wright. 'Shem Cooke and his Family in Granville and Franklin Counties, North Carolina'. Historic Maury-a Quarterly Publication of the Maury County Historical Society 32, no. 1 (Mar 1996): 12-29.
Posted by Marie Cooke Beckman at 8:28 PM

Email ThisBlogThis!Share to TwitterShare to FacebookShare to Pinterest
Labels: article, Cook, thank you