My mother DNA tested at AncestryDNA and I have viewer rights to a number of my Cook / Putman cousins match list there as well.  Mom's test  helps to sort matches so that I know if they don't match her they are thru my Dad. I sort Dad's lines into Cooke / King and  Jakes / Frizzell.  I can further sort within each group.   We have a group of  matches who are the descendants of  John Hight and Eleanor Nichols.  These matches are shared with my Cook / Putman cousins.  Several of their descendants were already in my tree as they are kin to some of my Putman cousins but not thru the sibling of the Putman I match.

A number of these Hights were in the area of Bedford County where my W. C. Cook(2nd Gr Grandfather) lived and one among the purchasers from the estate of Joseph S Cook.(W.C. was admin of that estate but we do not know WC's connection to Joseph)  Many  times the movement of our ancestors occurs because of their desire to own land.  Some of John & Eleanor's descendants moved to Johnson County Illinois.  Illinois uses the public land survey system(think grids) and because of this I can use HistoryGeo's First Landowners Project to look at Johnson Co. IL to see if I can find any of the Hights.  A visual reference can be very helpful. 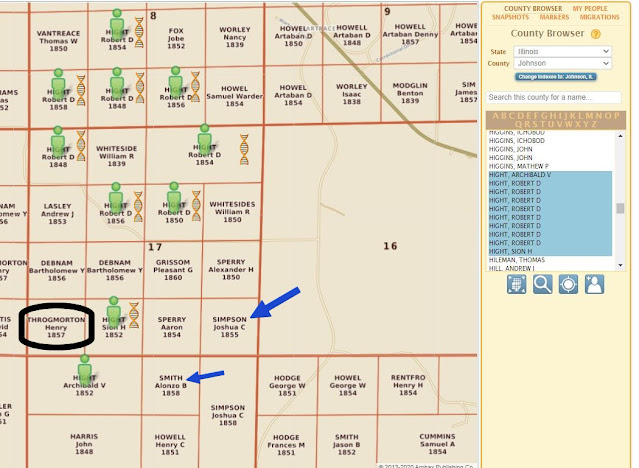 I was able to find them and also some surnames that were familiar to me from my research of the Cook and Putman lines.  Now to add exploring all of the Johnson Co IL records to my "To Do" list.  I'm still working on the ones in Williamson, Maury, Rutherford, Bedford and Marshall Co TN--places where descendants of the Y DNA line which my Cooks match were known to have been.
Notes:
HIGHT-- There is another Archibald Hight mentioned in Maury Co TN  probate records. The purchasers at the estate sale  are Richard B Hight, Sion Hight, Robert Hight, Wm Hight and several others.
Ancestry.com. Tennessee, U.S., Wills and Probate Records, 1779-2008 Maury Co TN  Wills Vol B-C 1809-1825 images 635(sale p.390) & 698(inventory p. 495) of 714.
Ancestry.com. Tennessee, U.S., Wills and Probate Records, 1779-2008 Maury Co TN  Wills Vol D-E 1826-1832  image 117(settlement p.170) of 596.
SMITH--While Smith is a very common surname it is one that intermarries with Hight, Harrisons and Putmans.
SIMPSON--The cemetery where W.C. Cook & his wife are buried in Bedford Co TN is the Simpson Cemetery.  It was named after the family who gave the land for the cemetery.(John W Simpson)
THOGMORTON--Typed index to burned volumes made from the register's notebook 1852-1861 for Bedford Co has an entry for a deed from a Thomas Cook to Martha Thugmorton(similar enough to note)  See list on profile page of W C Cook in my Cooke / Luna Tree at Ancestry.