In a previous blog post, I'd written a bit about Garrison King who lived in Dickson Co., TN and some of whose descendants are among my DNA matches.  In that post, I also mentioned Gilford Cook who is likely the brother-in-law of Garrison King(Garrison's wife was a Cook).

I found two entries in Tennessee Convicts:  Early Records of the State Penitentiary Volume 1. These gave me a lot of additional information on him which I used in the summary below.

Gilford Cook was born and raised in Franklin County, North Carolina and it was there where he married Sarah Bass, December 2nd of 1821.  Gilford was a shoemaker and lived in Wilson Co TN(near Richard Drake) before moving to Dickson Co. TN in 1833. He was charged with and convicted of larceny in a Dickson Co Court and thus sentenced to 3 years in the penitentiary where he was received on the 19th of February 1837. His family lived near Kendrick Myatt's on old Natchez trace 15 miles from Charlotte.  Gilford was discharged January 8, 1840, where his conduct while there was recorded as good.  His description according to this record was:  age 48, 6 foot 2 inches with dark hair and grey eyes.

Below is the 1840 census entry for Gilford Cook's family which would have been almost 4 months after his release. 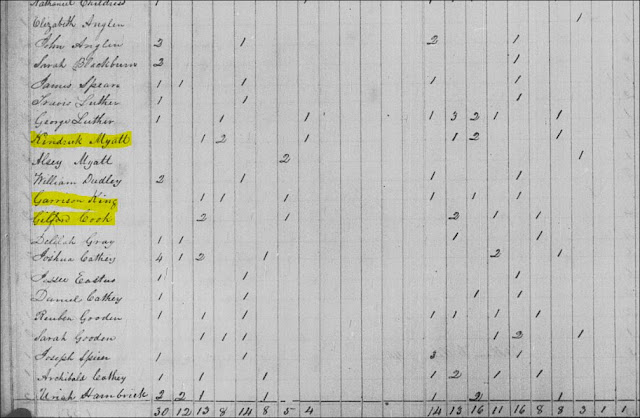