If you are actively working to identify what relationship you share with your DNA matches, you have likely heard of the What Are The Odds tool, commonly referred to as WATO.   It is part of DNAPainter.com and you can learn more about all of the tools by visiting the website. While I use the tool mainly when I'm helping adoptees, lately I've been using it to get a visual of the assessment of people who have tested from specific ancestor couples.

One of my larger AncestryDNA Circles is that of Jabel Putman my 3rd Great Grandfather.  There are 106 members but I want to know if these testers represent someone from all of his children or just ones thru several branches. He is believed to have had 12 children.  Using the WATO tool I chart each line from Jabel to the tester.  I also look at the shared matches within the circle members to see if I can identify others who are descendants of Jabel who weren't included due to not having him in their tree.  I have added some that I've found at other sites as well.  Below is a closer look at two of the children of Jabel.  I didn't show the right side of the chart as it contains the names of living and testers but it gives you some idea of how it looks. 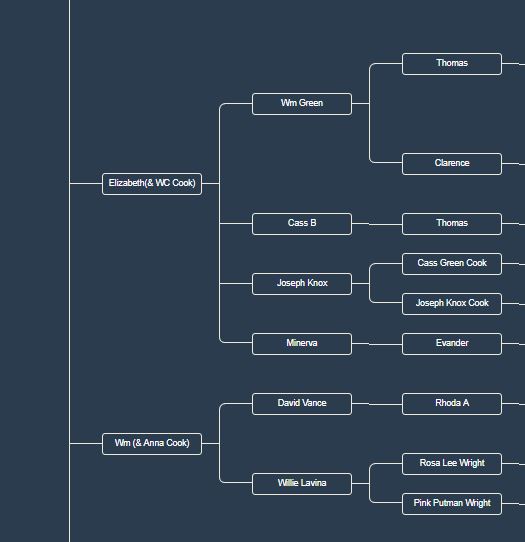 The chart is a work in progress.  I will be adding more testers as I identify them.
Of Jabel's 12 known children, it looks like all but 2 have descendants that have tested. There is a representation of the following among the Jabel Putman descendants:

Please note that there are varying amounts of testers from each of those children's children who have tested.  Below is a zoomed out shot of the chart(just a small portion of it) which continues out to the testers on the right for each line.  This can be used to see the coverage or to identify testing opportunities. 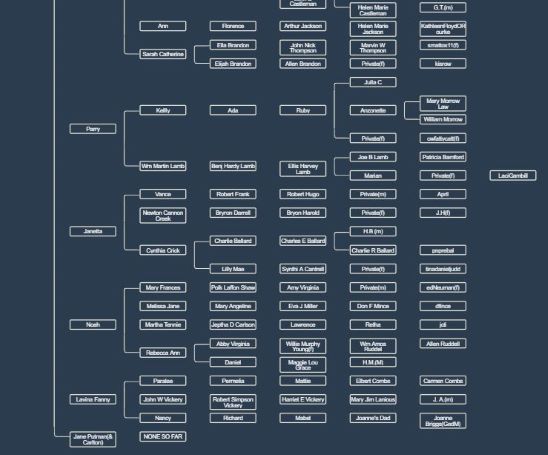 Posted by Marie Cooke Beckman at 9:40 AM