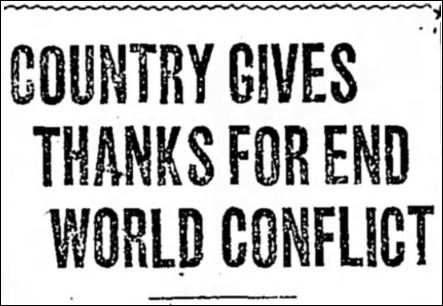 This was the headline of the article on the front page of The Tennessean(Nashville, TN) from Friday, November 29, 1918.  Friday's edition of the paper was telling about the Thanksgiving day celebrations which took place in other parts of the county and the world.  The Friday sales were simply known as Big "After Thanksgiving" Sales.  There were no BLACK FRIDAY sales.  What did they advertise?


My Dad's parents, Mr. & Mrs. Thomas DeWitt Cooke were living in Marshall County Tennessee with 2 daughters--ages 3 and 5, and one son who was a 6-month-old.

My Mom's parents, Mr & Mrs. William Richard Luna were either living in McElroy, TN(Van Buren Co.)   or in Huntsville, Alabama (Madison Co.) with their 2-year-old son.  Their next child(a son) was born almost 9 months later in Alabama.