Hide and Seek in the US Federal Census


I was looking for a census entry for the Waynick family and found this entry which is an excellent example of why we should always check the census images AND surrounding households. 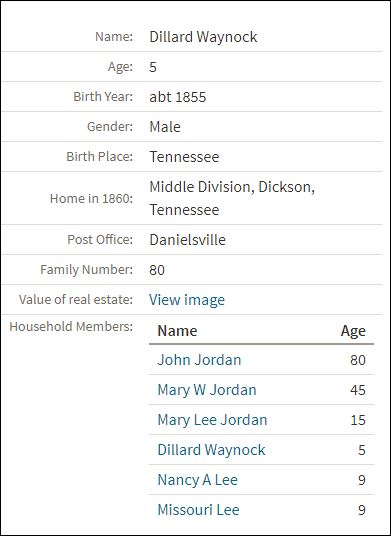 The census entry as it is indexed makes it appear that 5 year old Dillard is living in the household of John Jordan. If you look at the image below, you will see what has happened. The census taker M.F. Shelton has realized that he omitted Dillard.  He has added Dillard at the bottom of the page in the middle of another household entry.  The 9 year old twins are on the next page.  Yes the census taker does note that Nancy and Missouri Lee are twins.  I wondered if they were actually supposed to be in the Jordan household.  Who knows.....No notation is shown beside their names other than noting that they are twins.

The household # 47 where Dillard belongs is shown below

This entry is from 1860 Federal Census Middle District of Dickson County Tennessee.

I would also like to add that it is good to check the very last page of each District in which you have an ancestor.  This is especially true if someone isn't in the census and you think they should be there.  Several times I've found that the enumerators listed folks that hey had omitted from the household.  I've also found several mothers who list all of their married adult children as still living at home.  Duplicate entries can also occur with people listed in different districts and when a person is living/working in homes other than that of their parents.  Does this hold true in your census research as well?
Posted by Marie Cooke Beckman at 10:40 PM