I'd always known my Great Uncle John Lemuel Cook's wife as Malissa Ghee.  Sometimes the spelling of her name(both given and surname) varied but that is not uncommon.  John and Malissa's marriage record had not been located and I'd estimated their marriage to have occurred around 1909.  This was about the same time that the William G Cook family group picture was taken.  A search of the Rutherford Co TN marriage records showed a marriage bond¹ for a J L Cook & M A Barnes but with only initials for the couple more evidence was needed before I could form a hypothesis that these were the same people since the last name in this record wasn't the expected Gee/Ghee. My next step was to look in the 1900 Census for Ghee/Gee families in the area of Bedford, Rutherford, Marshall and Williamson Co TN.  I found a number of families but none with a Melissa or Malissa of the right age. There was one couple, Lee R Gee & wife Delia² who had a daughter listed as Lissa Gee. Lissa's age was close enough that I went looking for that couple's marriage record noting that their census entry listed "Number of Years Married" as 14.  That would mean their marriage occurred in 1886--that's two years before Mary C Gee(listed as their youngest daughter) was born and means they were not married when Lissa was born. This opens up the possibility that Delia's husband is not Lissa's father.  I found a marriage record in the Rutherford County Tennessee records for 1886 between a Robert L Gee and a C A Barnes³. Barnes...that was the name of the lady that married J L  Cook. It could be a coincidence so I checked  the marriage bond and the marriage return entry⁴ for the J L Cook and M A Barnes again and the entry directly beneath it caught my eye.  It was for an I F Haynes and a M C Ghee.  Could that M C Ghee be Mary the youngest daughter of Lee and Delia and sister of Malissa? A search for Delia Ghee's death certificate⁵ reveals that her full name was Cordelia Alice Barnes Ghee and the informant on her death certificate is none other than J. L. Cook. I believe I have enough evidence to state with great certainty that Malissa Ghee, wife of John Lemuel Cook was Malissa A Barnes, daughter of Cordelia Alice Barnes(wife of Robert Lee Ghee). At this time, I do not have evidence which would identify Malissa's father. 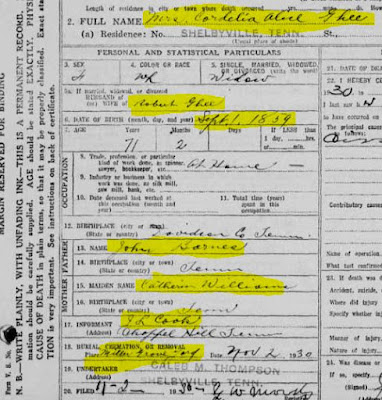