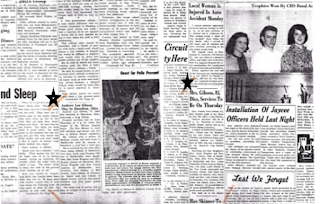 I've been going thru folders and binders looking over copies of things I ordered when I first started researching my family history in 1990.  Around that time I sent a letter to the Shelbyville Time-Gazette or the library in Shelbyville(I can't remember which one and don't still have the envelope) and got a copy of the obituaries of my Paternal Grandmother's sister Cora Jakes Gibson and her husband, Andrew Lee Gibson.  The image I have included with this blog post is a side by side screenshot of the two copies of the obituaries.  The information within the two obituaries is included below.
Andrew Lee Gibson Dies in Hamilton Ohio
Andrew Lee Gibson, 77, died this morning in Hamilton, Ohio following a long illness.
Funeral Services will be held Thursday at 4 pm from the chapel of he Gowen funeral Home. The Rev. Homer A Cate will officiate and burial will follow in Willow Mount Cemetery.

Mr. Gibson was a native of Bedford County and had lived in Shelbyville until he moved to Hamilton a year and a half ago.


He is survived by this wife, Mrs. Cora Jakes Gibson of Hamilton;


Mrs. Gibson, 81, Dies. Services to Be On Thursday
Mrs. Fannie Cora Gibson, 81, died Monday night at her home on Hay Rd. after a long illness.
Funeral services will be at 4 p.m. Thursday at Gowen-Smith Chapel. Burial will be in Willow Mount Cemetery.

A native of Rutherford County, Mrs. Gibson was the daughter o he late James Jakes and Thelitha Ann Frizzell Jakes. Her husband Andrew Lee Gibson died in 1951. She was a member of the Hoover's Gap Baptist Church.