Having found one of the granddaughters of Milly Riddle in Ancestry's  Database U.S. Special Census on Deaf Family Marriages and Hearing Relatives, 1888-1895 I was able to gather so much more information which led to finding two more of Milly's granddaughters(also thru her daughter Rebecca Hitchcock wife of Thomas Jones).  Technically I found two daughters and the Charles Bronson(widower of Catherine Jones Bronson)  By the time of this census--most of the paperwork for their entries showed 1889 and 1890--Catherine had been dead for the better part of 15 years.  I've taken that into account when I am analyzing the documents in Charles Bronson's files.  I also believe that there was another Catherine Jones' information mixed up in the files as the persons who were collecting the information were trying to go over the results.

If there are multiple marriages the four page form was filled out for each couple.  There are 12 pages in the grouping for Charles.  This may be an Ancestry thing I'm not sure as each couple has a different file number. Charles Bronson (#173--contains 4 pg form Images 1-4)Charles Bronson is listed with Catherine and Catherine's date of death is noted.  Notation that this is Charles' first marriage (#1350-- contains 4 pg form--images 5-8) Edward Francis and a Catherine Jones.  She is born around the same year range as Catherine Jones daughter of Thomas Jones and Rebecca Hitchcock.  Their marriage year is listed as Jun 12th 1860.  A time hat which I can place Catherine in Tennessee(White Co Dist 6) with Charles Bronson living near her father.  (#174 --contains 4 pg form  Images 9-12)Charles Bronson and his 2nd wife Sarah Willhartz.  Charles and Sarah married about 13 months after Catherine's death. There is an article about the marriage in the The Courier-Journal (Louisville, Kentucky) Thursday 11 Jan 1877  edition page 4 column 2.   There is very little information filled in for Edward Francis and Catherine Jones(they appear to be from Iowa). Just enough where the year of birth is similar to that of Catherine Jones Bronson and causing confusion.  I have to keep in mind when they were analyzing the information in the 1890s they did not have the advantage of being able to view the 1860 and 1870 census entries for this family.  See those census entries below with notations I've added. (click to enlarge)

Catherine is listed as a pupil at the Tennessee School for the Deaf in 1851 (see http://knoxcotn.org/old_site/schools/tsd/students1.htm) 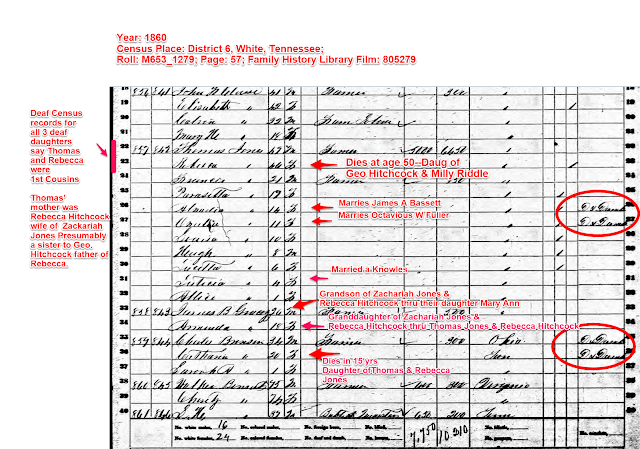