While I'm not a current subscriber to Ancestry, I have had my DNA tests done there and I have a Family Tree on their website.  They announced new technology using trees and dna evidence to further our research.  See the Ancestry announcement at their blog.  I received the following email about this new feature. 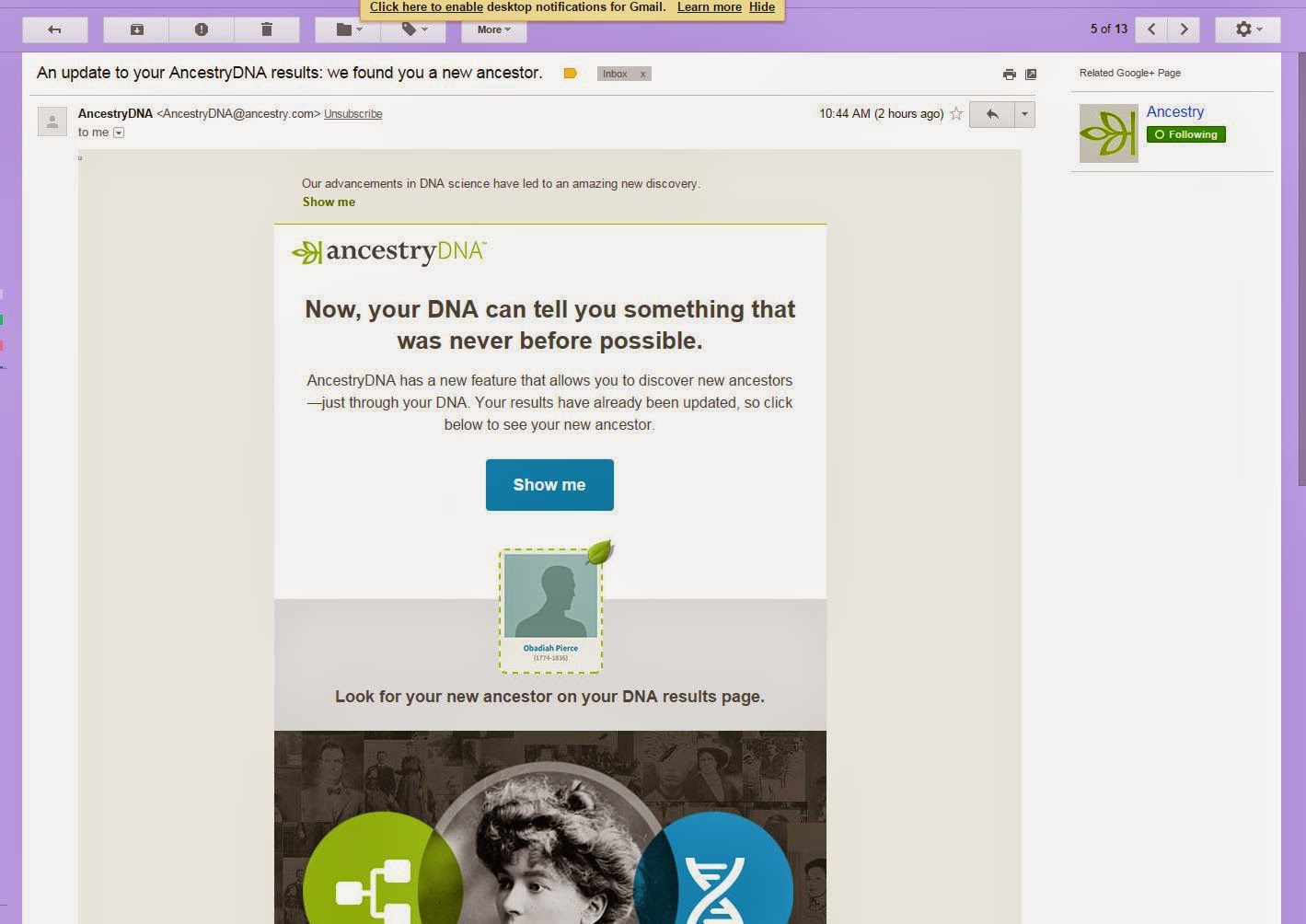 When I clicked on "Show Me"  I was taken to my Mother's DNA kit which I admin.  It showed me a list of 3 new discoveries of her Ancestors. 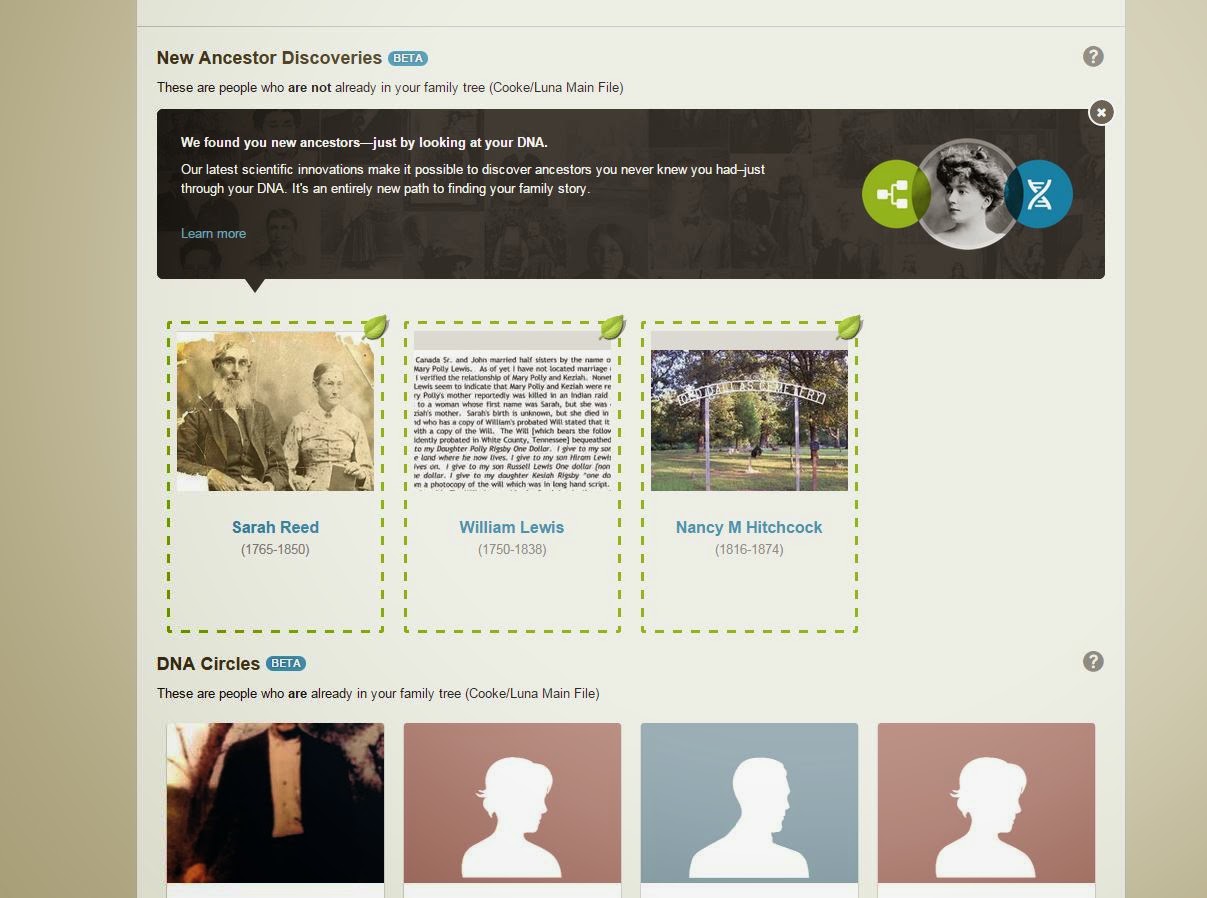 This is going to be a great tool but I see some issues with it.  The three people it showed were persons I already know about.  When you click on the discoveries you are taken to an outline for that person with the option to "Learn More About" which, when clicked, takes you to the subscription options for US & World if you aren't already subscribed.   If you click on "See her connection" to this new ancestor you are taken to the 14 day trial option page. The Sarah Reid I had not put in the database.   She did not die in 1850 though as it states.  She was killed in 1793 by Indians at Greasy Cove(which is in present day Unicoi Co. TN). Only two of the children survived. I am a descendant of the daughter, Mary Polly Lewis who was taken by the Indians and later ransomed by her brother who traded a gun in order to get her back.  Wm. Lewis'  2nd wife died in 1850.  Wm. Lewis was already in my database and I'm not really sure why they would call this a new discovery.  It looks like a mixed soup of information for the 1st and the 2nd wife and showing them as one.  Odd.


The Nancy M Hitchcock is not an ancestor of my mother.  She is a cousin.  Her Brother James P. Hitchcock is my Mom's GG Grandfather...they both married into the Fleming family.   Nancy married the brother of James' wife and that may be why the DNA is making it appear here. 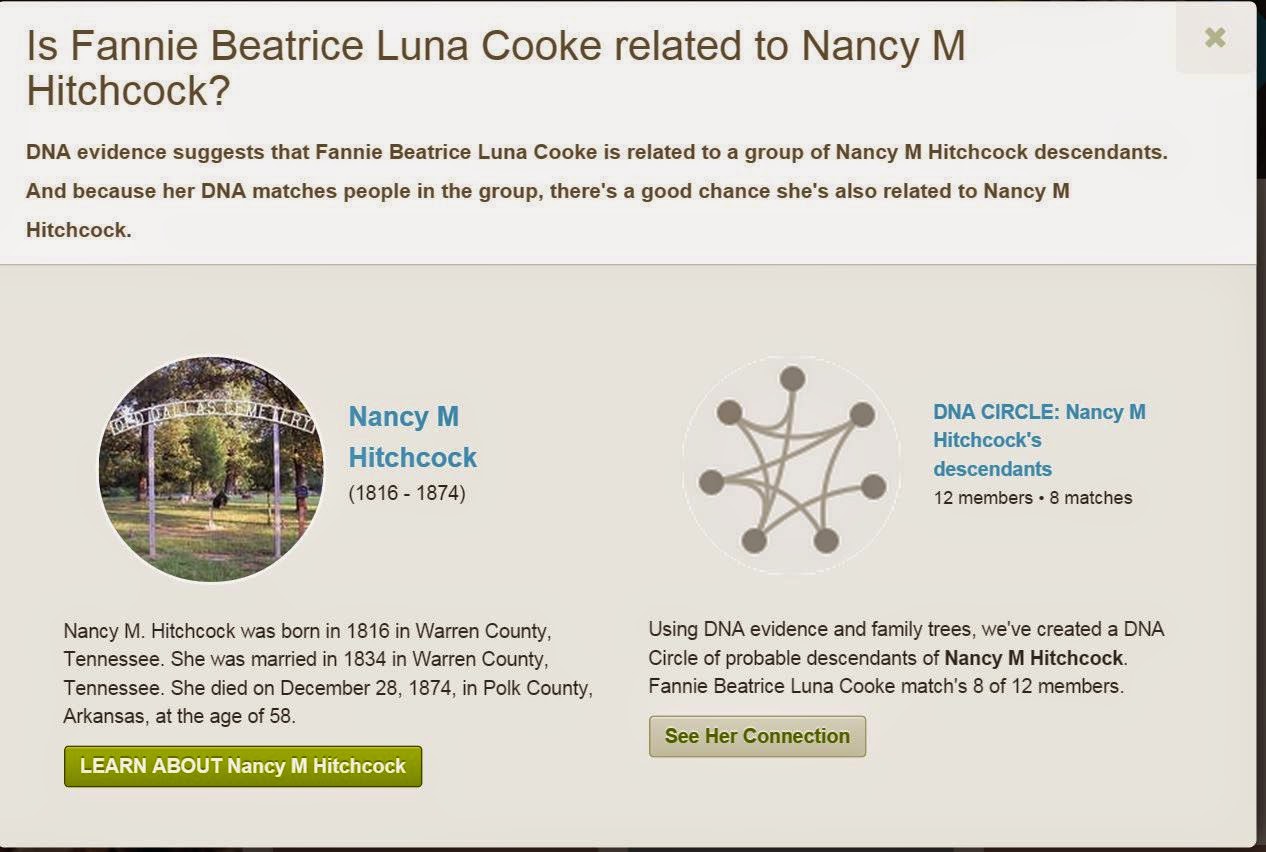 They have already put Nancy's husband Alfred Fleming in Mom's DNA circles as an ancestor(which he is not) though they do correctly list him as an Uncle.  odd.  Will it be doing this in all cases where you have two siblings of one family marrying two siblings of another?  What will it do for cousin marriages?  It is some what easy to see when you know of the intermarriages..but if you don't it further adds to the confusion.  Maybe there is something in the works to help with this. 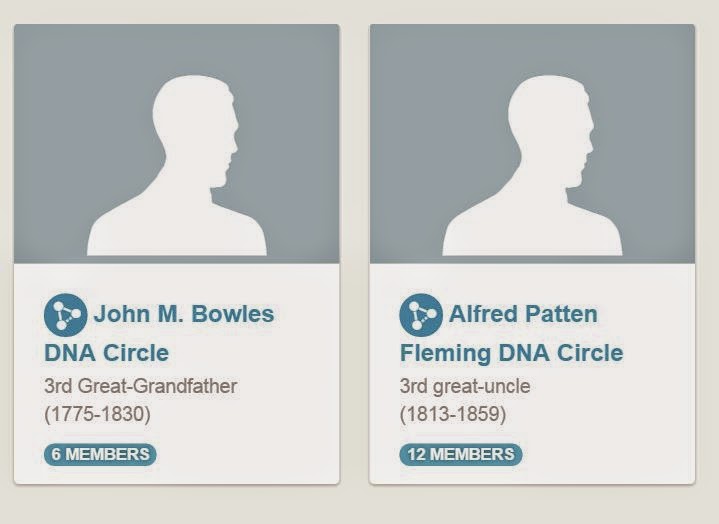 As with anything new there is sure to be a learning curve on both sides. I just hope this will be a very useful tool for researchers.
Posted by Marie Cooke Beckman at 2:17 PM