I've mentioned several of these district line changes on forums and in chats but wanted to blog about this.  There seem to be a number of district boundary line changes in court in the later part of the 1850s in Bedford Co TN.

1855 Feb Term pg. 413(page 119 of Marsh book)
On petition of John Jackson, William G Hight, William C. Cook, Thomas Davis, Jno W Manier, William King and Jno Boyce, it was ordered by the court that the line of Civil District #11 be changed as follows, to wit, commencing at Weakley's Creek and running with the public road by Hight's to as to include the lands of the petitioners from District #9 to #10.  21 justices voting in the affirmative. 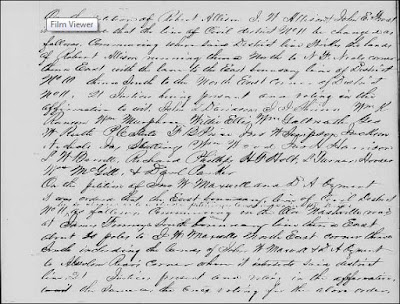