I've been trying to come up with a way to use the information about the matches that I have at MyHeritage to further my research. I have two siblings, my Mom, and my paternal Aunt's tests uploaded there and have been doing comparisons. I had noticed a good bit of matches from Finland prior to MyHeritage updating their match algorithm but now we have 79-109 matches from Finland. I thought it might be a good idea to look at those matches for each of us and see where they matched. I looked at the ones which were medium confidence(which was pretty much just the first page...the others were low confidence matches) The matches that we both have, match us exactly the same--no variation in cMs. They also match our Paternal Aunt. All match on Chr 2. This is a segment that I have identified as having been passed down from my Paternal Grandfather. There are also matches from Sweden and Norway overlapping. I painted those in Jonny Perl's DNApainter shown below. The matches I painted were the largest from each of the three areas that overlapped near the end of Chromosome 2 a bit beyond what is considered a pile-up area. 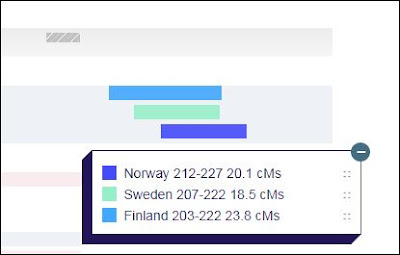 In addition to sharing these matches with my paternal aunt, these matches are in the segment that has been visually phased as coming from my Paternal Grandfather, Tom Cooke. See the image below showing the phasing completed by using Steven Fox's Visual Phasing spreadsheet(available in the files section of the Facebook Group The Visual Phasing Working Group) The Visual Phasing chromosome ribbons are:(Top to Bottom) Me, my Sister, and my Brother.  Click on the image to enlarge. 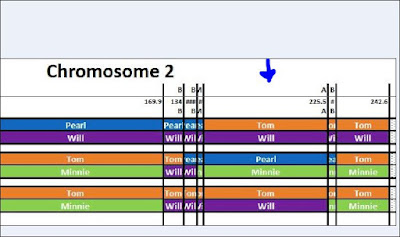 I've never put much into the ethnicity estimates but seeing the increase in matches in common and from a specific region, I'm wondering if this is a "footprint" of a distant ancestor from that region(s) or if it is from imputation. The few matches from this area that I'd seen prior to the results of my uploaded kit at MyHeritage were from those who had tested with FTDNA. The majority of testers at AncestryDNA are from the USA and UK.

Now that MyHeritage has a chromosome browser, I was able to compare the segments and see if they triangulated. They do triangulate for a segment of about 13.6 cMs. The figure below is from the comparison tools at MyHeritage and I've included a smaller additional match from Finland as well as the ones in the previous example. The comparison without the additional match from Finland yielded the same results of a 13.6 cM triangulated segment.

I've not yet identified my 3rd Great Grandparents for YDNA line. My brother has tested and we found the group of Cook(e)s to which we connect, however we lack about 3 generations to connect. Could this be from that line?  Certainly not anything close in as the connection is English.  It may be further on back in any one of my paternal grandfather's ancestors(shown in the screenshot of the fan chart below made using tools available at Rootsfinder.com). The ancestors in the blue area of the fan chart are those in my paternal Grandfather's line and are all in colonial America.   The majority of them, including the YDNA line, were in Granville County, North Carolina with earlier ties to Isle of Wight, Virginia.  I'm really not so sure that it is a valid segment and not one created by imputation.  Even if it is a valid triangulation the segment could be many generations back.  I will keep this in mind and if I find out anything further, I'll do an update with the additional information. 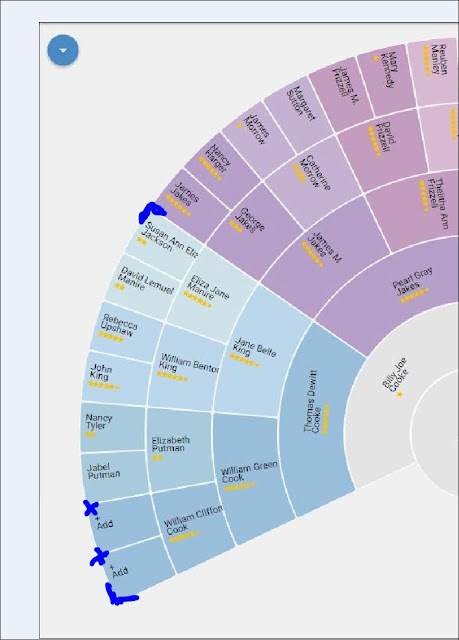